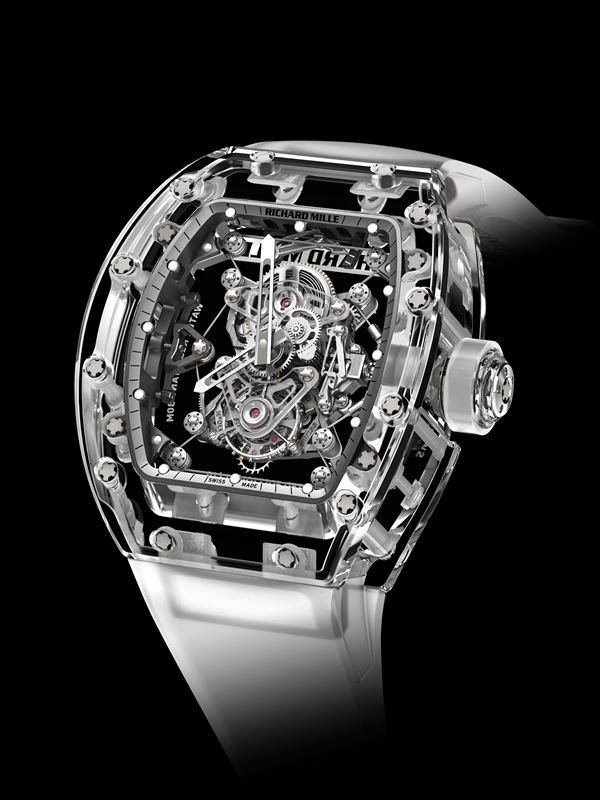 At Richard Mille, the fact that a tremendous challenge has been won is never a valid reason to stand still and be complacent. The introduction of the RM 056 Sapphire Tourbillon Split Seconds Chronograph three years ago was a watchmaking milestone of technical achievement; never before had such a complex case design for such an intricate movement been manufactured in pure sapphire. This debut was followed by the RM 56-01, which put the stakes even higher with a baseplate, bridges and third wheel additionally created from sapphire.

Today, a cutting-edge expression of horological transparency created expressly for the Watches & Wonders event in Hong Kong is presented with the magnificent RM 56-02 Sapphire Tourbillon and its new movement, taking cues from the mechanical architecture of the RM 27-01 Rafael Nadal and its cable suspended movement. By incorporating this cabled movement design within a world of transparent sapphire, an ultimate expression of weightlessness and transparency is evoked within the world of extreme horology.

In this fashion the baseplate of the RM 56-02, created from grade 5 titanium, is entirely suspended within the sapphire watchcase by specially developed single braided cable of only 0.35mm thickness, woven within a system of 4 pulleys on posts at the movement’s corners and another 6 pulleys placed along the movement’s periphery. The tension of the cable is perfectly controlled by a miniature ratchet at 9 o’clock. This entire cable unit is attached to a separate indicator located below 12 o’clock allowing an easy visual inspection of the cable tension, to ensure that it is always operating within the designated norms.

Other parts of the movement have also been optimized for transparency thanks to the experience gained with the aforementioned versions; in this case Richard Mille’s engineers have added to the previous use of sapphire movement parts a new design of winding barrel bridge, tourbillon and center bridges in sapphire. This fluently executed technical challenge is a crowning achievement of the sapphire family of timepieces within the high scaled variety of creativity to be found within the Richard Mille collection as an entity.

Sapphire, created from subjecting aluminum oxide crystals (Al2O3) to high pressure and temperature environments, is transparent due to the purity of its composition and has a hardness of 1800 Vickers (9 Moh’s) making it virtually scratch resistant by materials other than diamond. The tripartite case of the RM 56-02 is milled and ground from blocks of solid sapphire by the prestigious and highly specialized experts Stettler in Lyss, Switzerland, who had the difficult task of creating these movement parts and the unique, wrist hugging, ergonomically curving tripartite Richard Mille case.

These engineering and technical challenges are self evident when we examine the reality of creating something inimitable like the RM 56-02: 40 days, 24/7 of continuous machining are required in order to produce one case followed by 400 hours of machining and finishing for the different movement bridges.

The case of the RM 56-02, with anti-glare protection on both front and back bezels, is waterproof to 30 meters thanks to the utilization of two transparent nitrile O-rings assembled with 24 spline screws in grade 5 titanium. The partially translucent strap created from Aerospace Nano® by Biwi SA, exclusively for Richard Mille, provides a silky and almost organic responsiveness to the skin that perfectly complements the exquisite ergonomic perfection of the RM 56-02 on the wrist.

The RM 56-02 will be released in a limited edition of 10 examples worldwide. 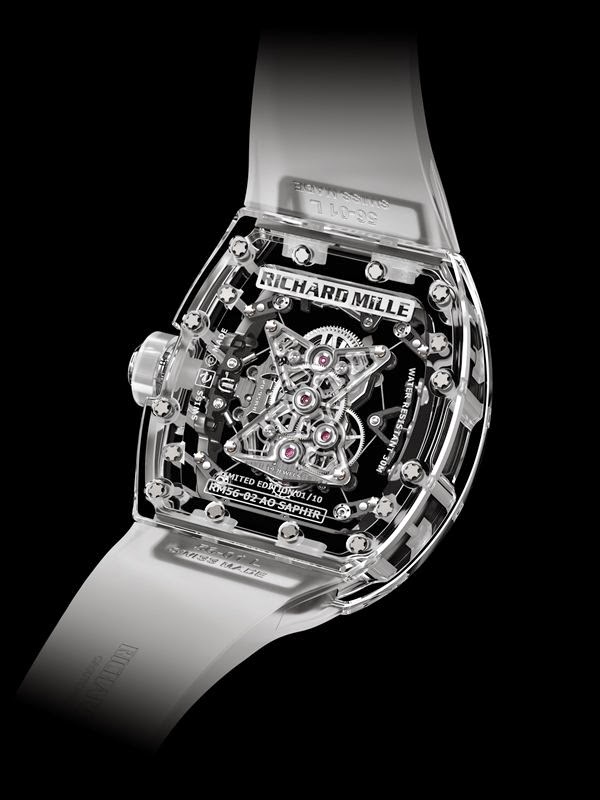 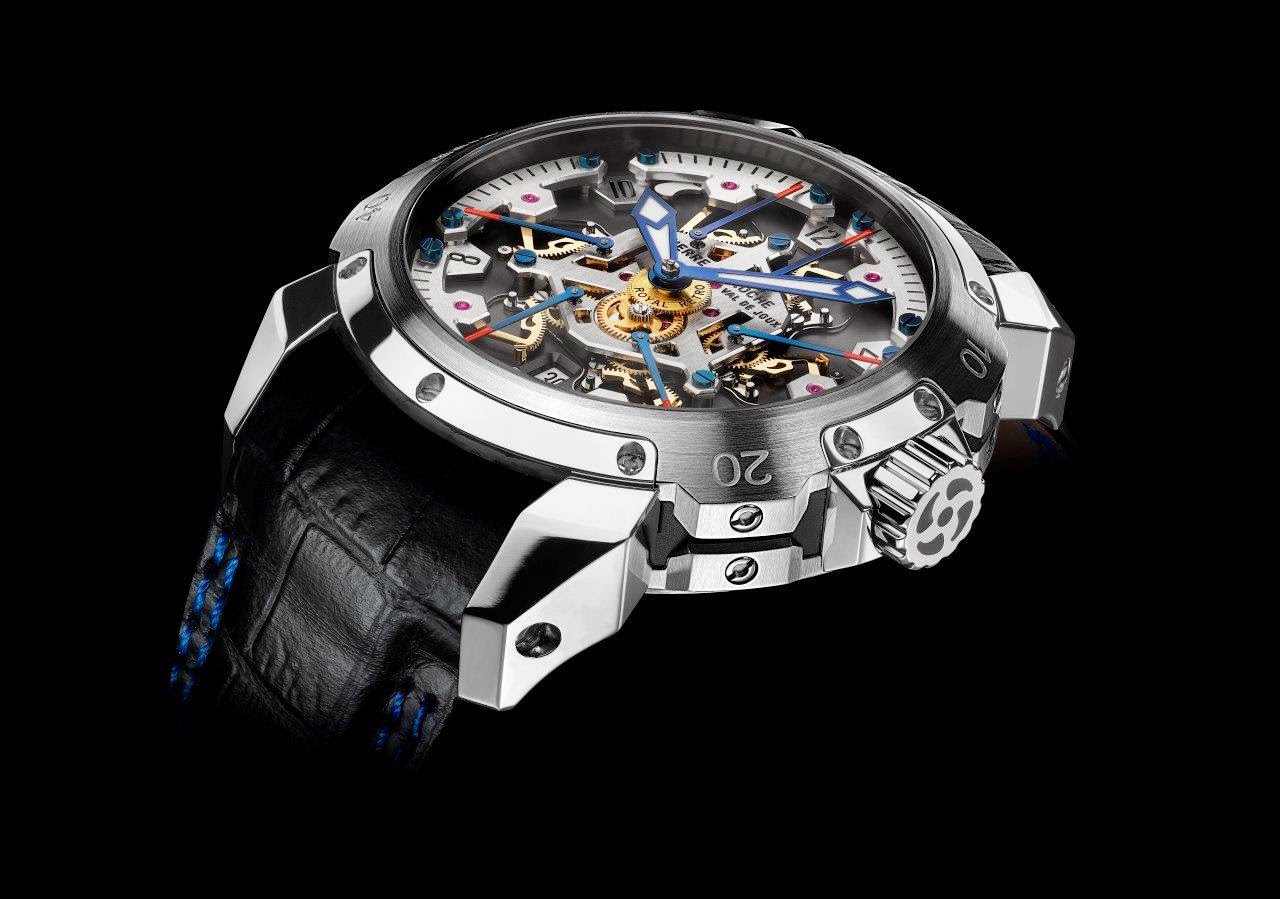 The Royal Retro movement is the essence of Pierre DeRoche. Five years after its creation, the brand returns to its roots. The same complications, the same personality, and the same nerves of steel in a more discreet size for slimmer wrists. The new TNT Royal Retro has shaved a little over 4 millimetres from its waistline, but is still geared for action. Seconds again put on a mesmerising show as one hand passes on to the next. «43» could well become the new number for the TNT Royal Retro collection. 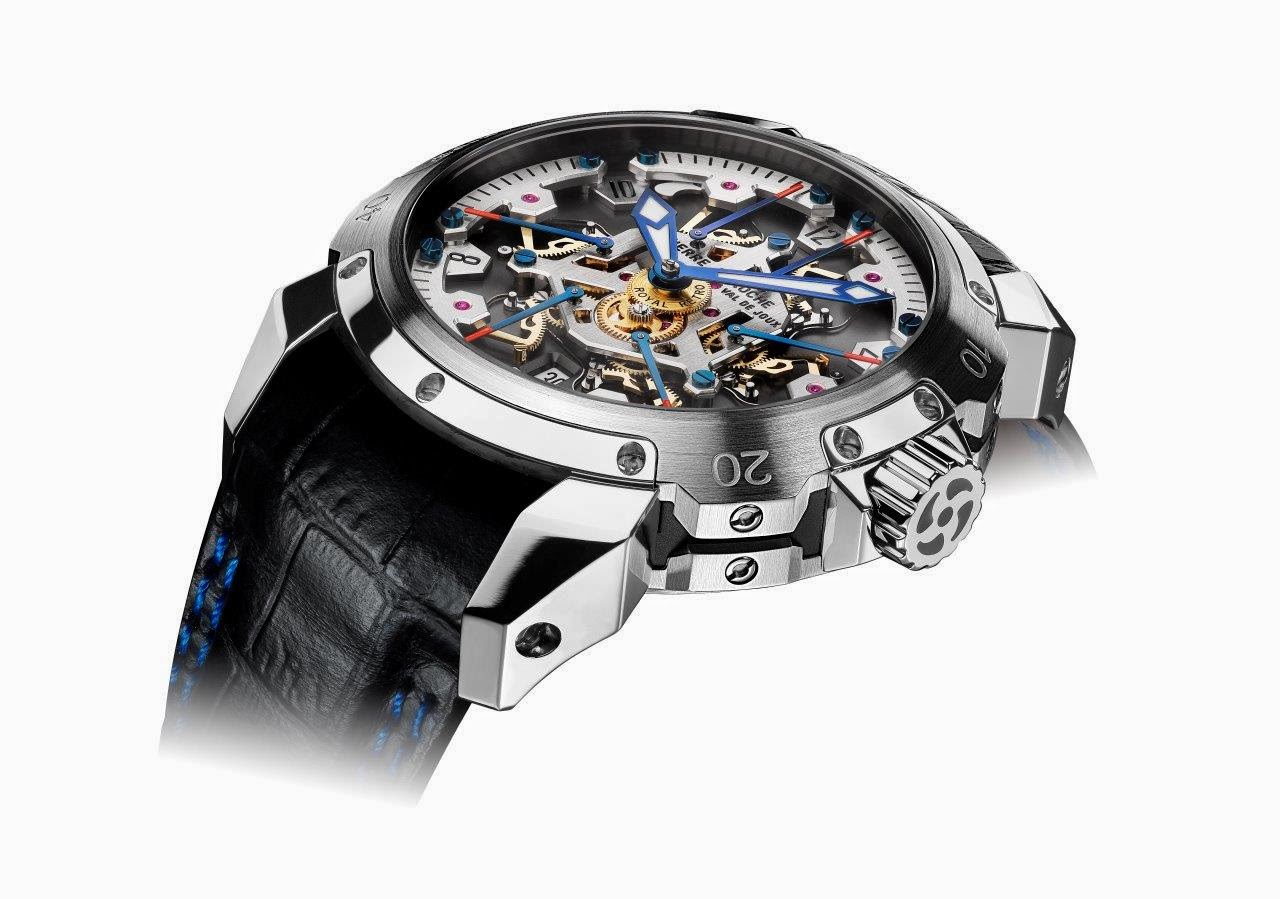 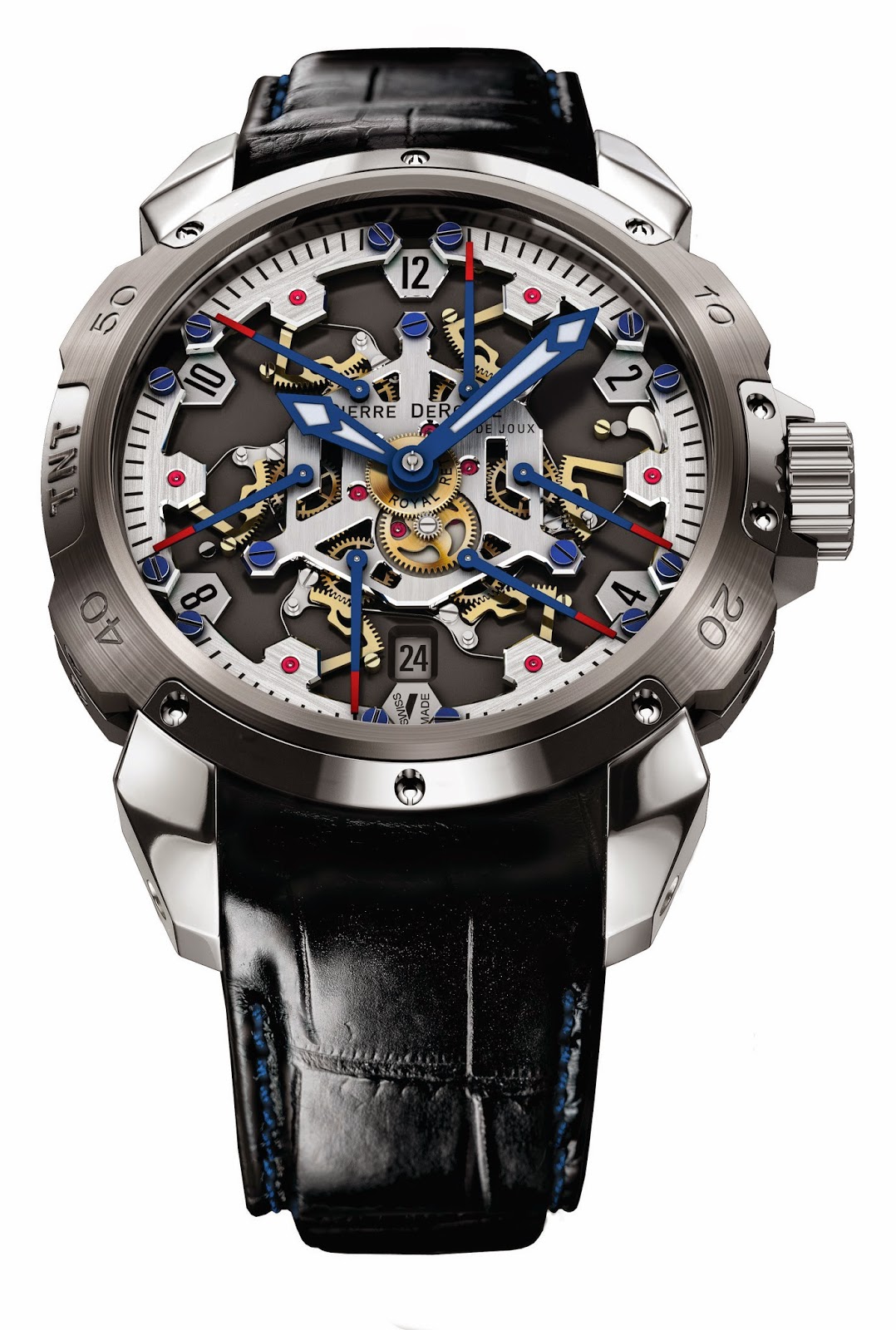 A panther woman by Cartier 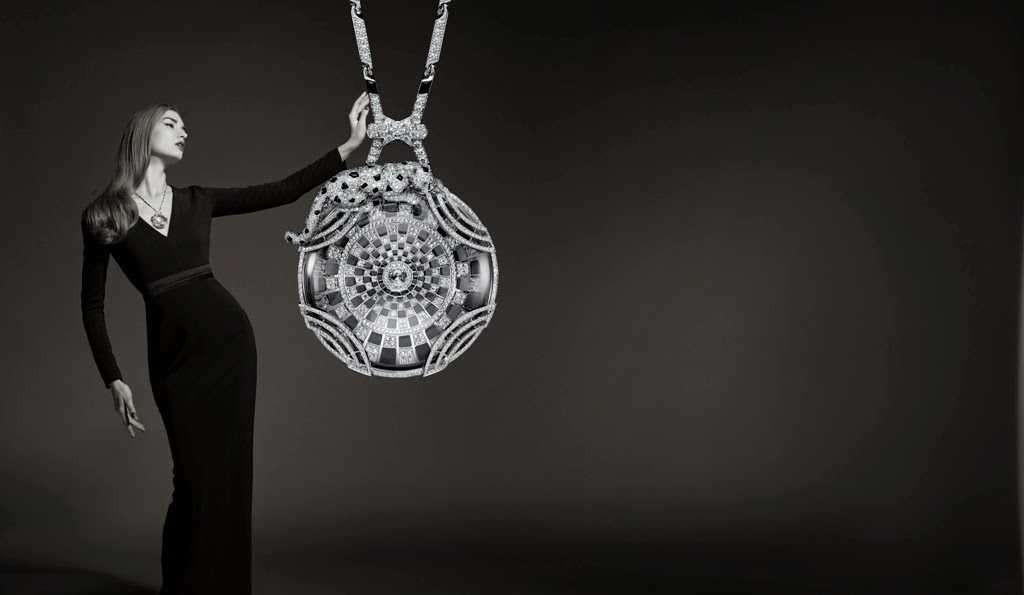 In 1914, Cartier created its first panther-spot motif on a wristwatch. Inspired by nature,
its black and white abstract onyx and diamond paving inaugurated the use of flecking in
jewellery and pioneered the contrasts of the future Art Déco style. That same year, Louis
Cartier ordered a “Lady with panther” from French illustrator and painter George Barbier.
The watercolour, initially used as an exhibition invitation, was then used by the Maison for
its advertising.

A panther woman was taking shape... but who was she? A predator, an Amazon, a mystery,
a fantasy, a muse, half-woman-half-feline?
What we do know is that she stood out, claimed her independence and freedom, and
marked her existence with a wild and beautiful femininity as only she could.
For Cartier, the first panther woman was Jeanne Toussaint, Louis Cartier’s close
collaborator and muse. She was original, creative and demanding.
She was an inventive source of inspiration who approached the feline step by step,
revealing its jewelled coat through an impression of spotted motifs before giving it
body and life. Cartier’s high jewellery creative director in 1933, in the eyes of her
major clients she enveloped herself in an indisputable aura of elegance by dictating
the famous “Toussaint style”. 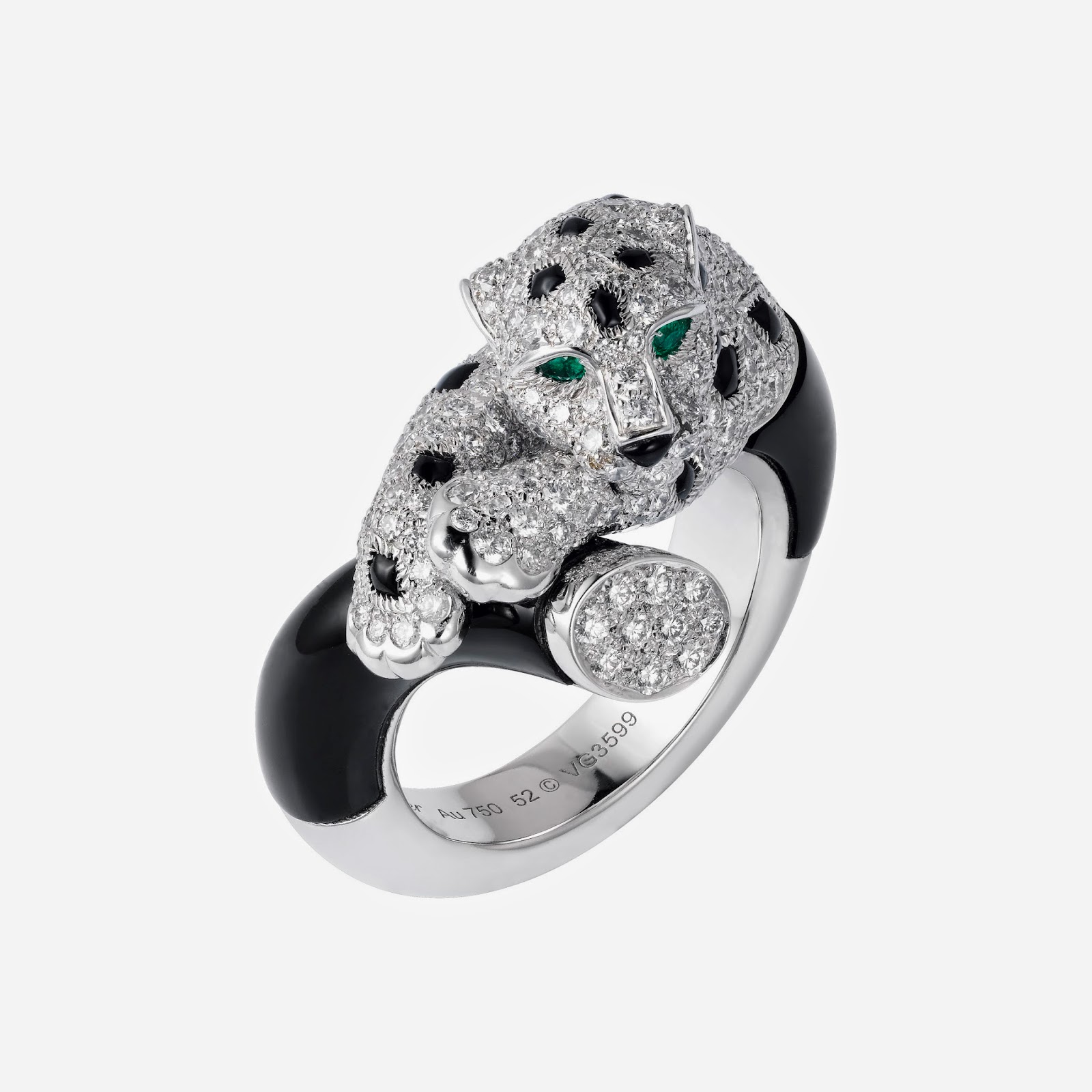 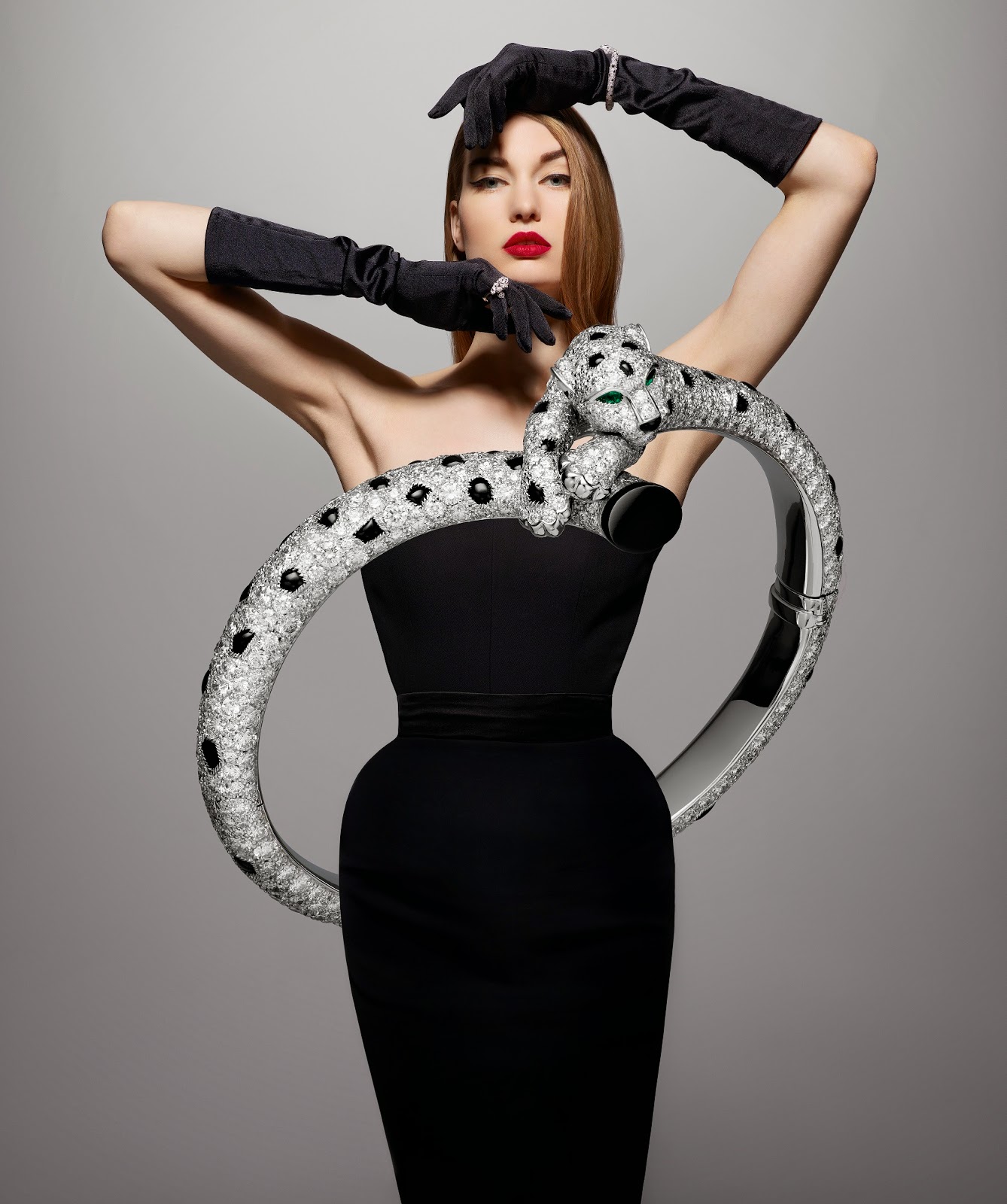 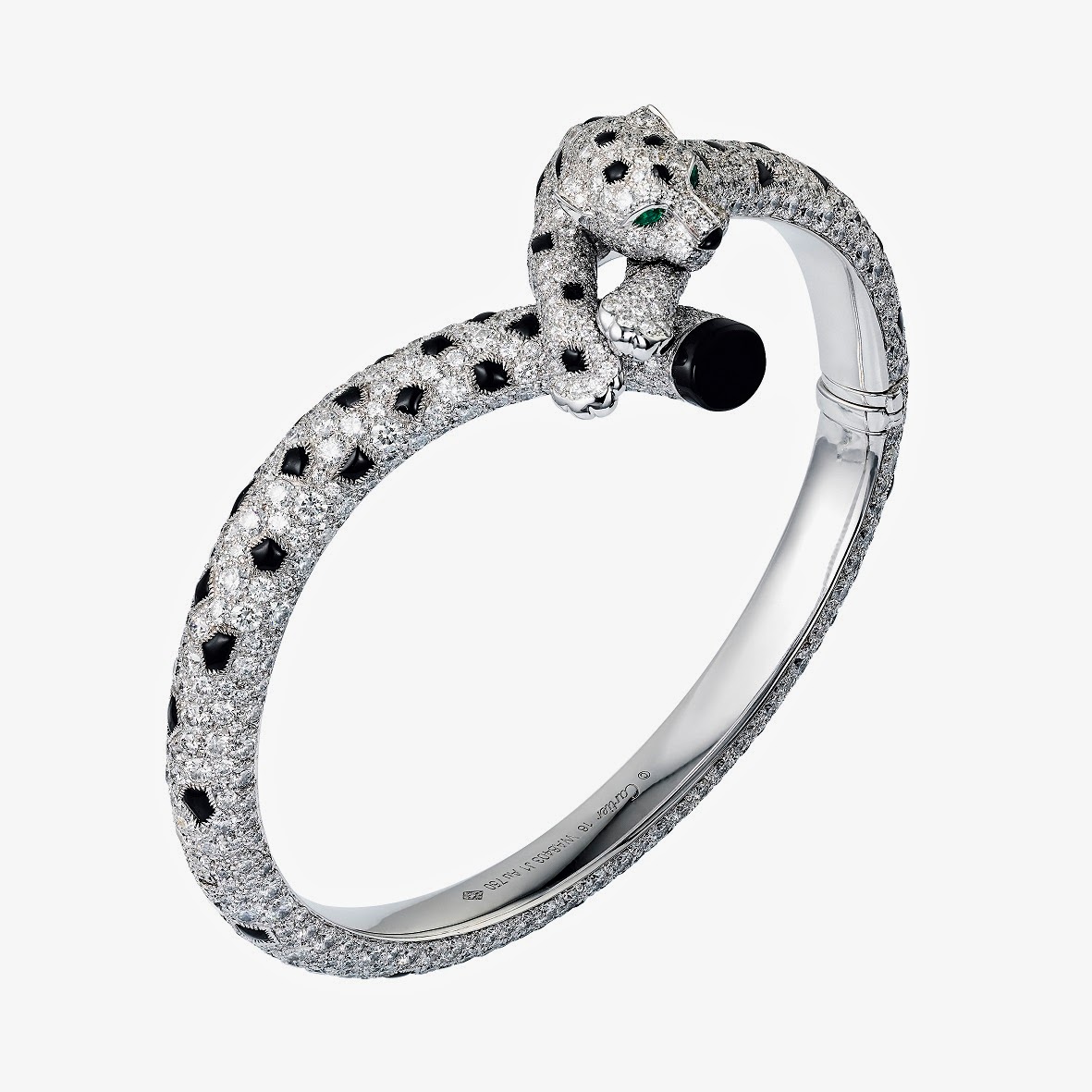 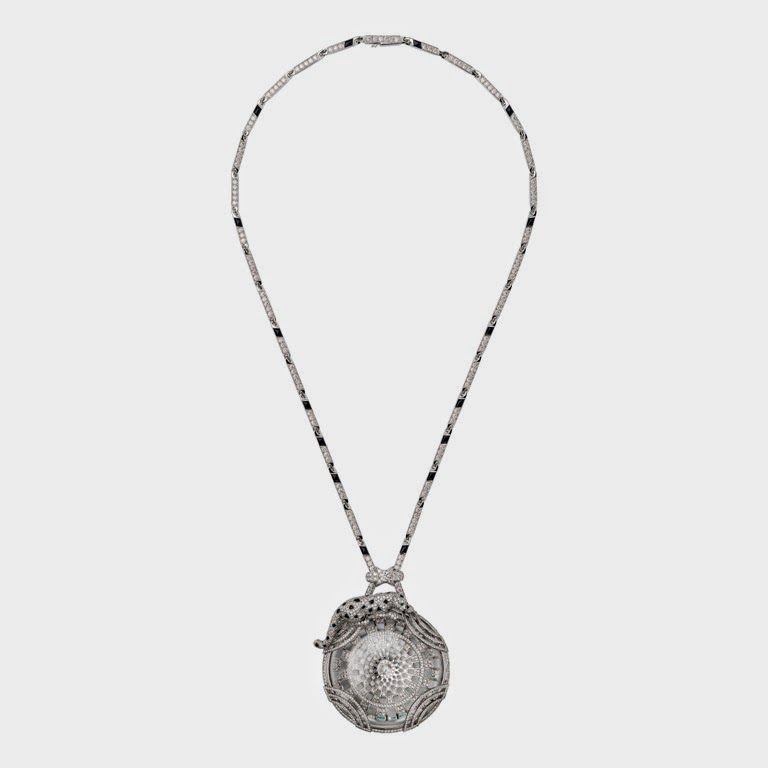 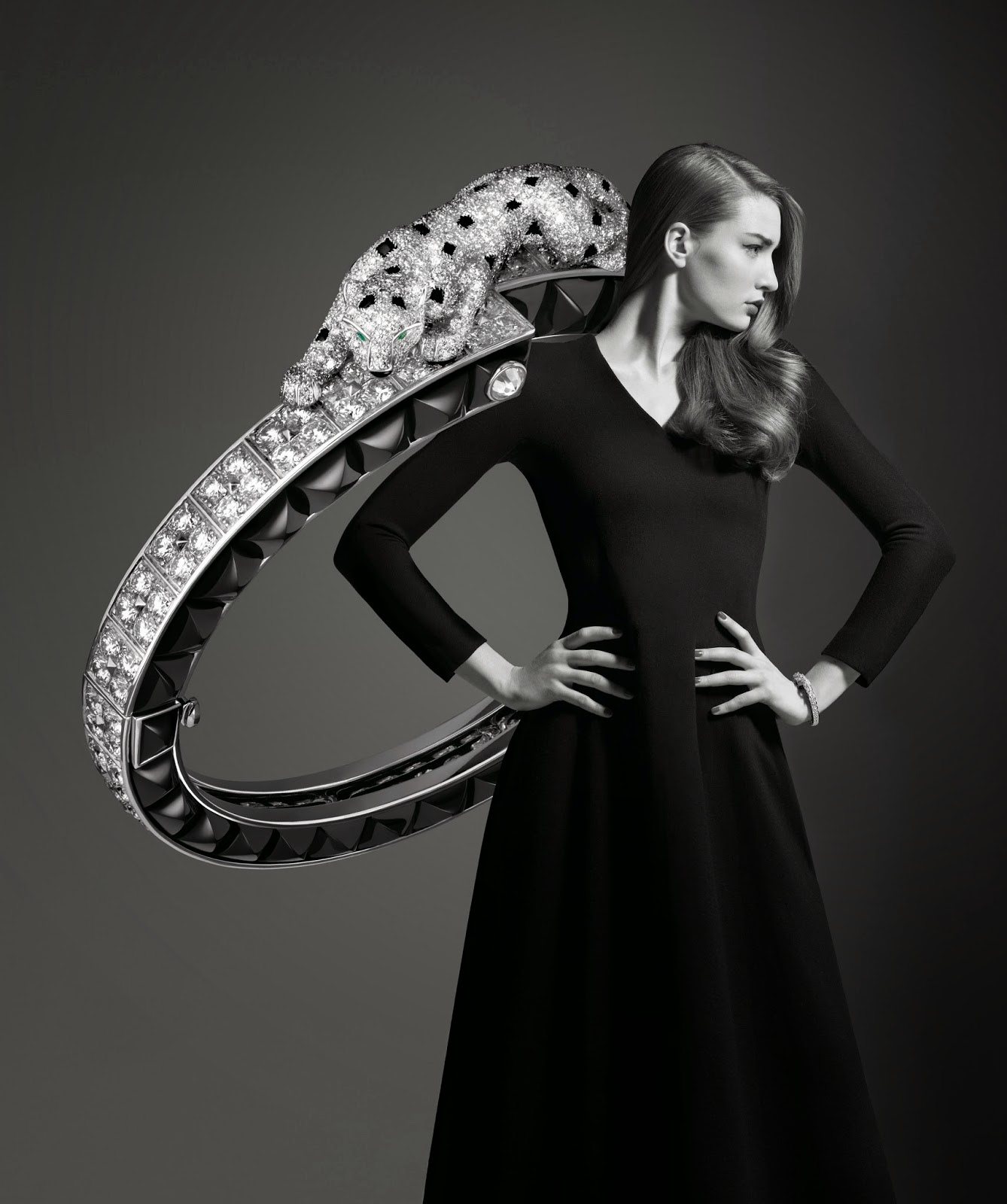 Jeanne Toussaint set the tone and others followed. A star-spangled dynasty was inaugurated
by the Duchess of Windsor, for whom Cartier designed an onyx-spotted diamond panther
on a 116.74-carat emerald cabochon in 1948.
Barbara Hutton, Princess Nina Aga Khan, Daisy Fellowes and María Félix, nicknamed
the Mexican panther, would continue the legend. These femmes fatales, feline women and
major Cartier clients were constantly in the spotlight and their jewellery reflected their
dazzling presence.

The magic of the Cartier panther was sparked by this magnetic seduction, which Cartier
crystallised in sensual form.
And almost a century on, it continues to surprise! Present in the most unexpected places,
it is revolutionary, strongly representing a style that defies boundaries. At the crossroads of
influences at once baroque and anatomical, minimalist and structuralist, comes a panther of
its time, more incisive than ever, whose forms evolve through new savoir-faire, unexplored
attitudes and unprecedented materials. 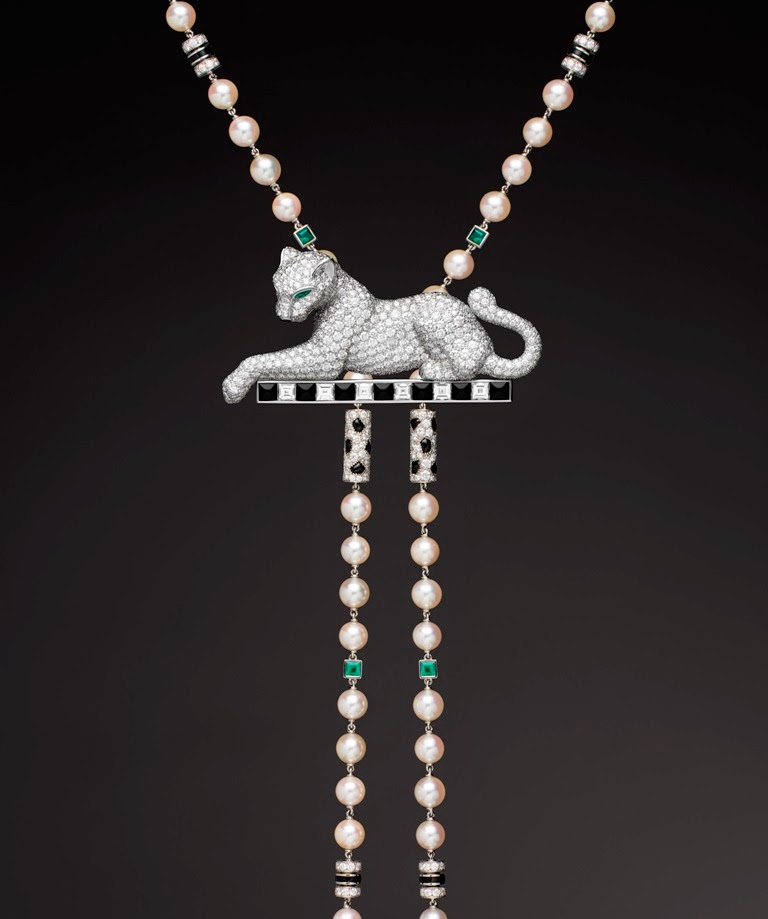 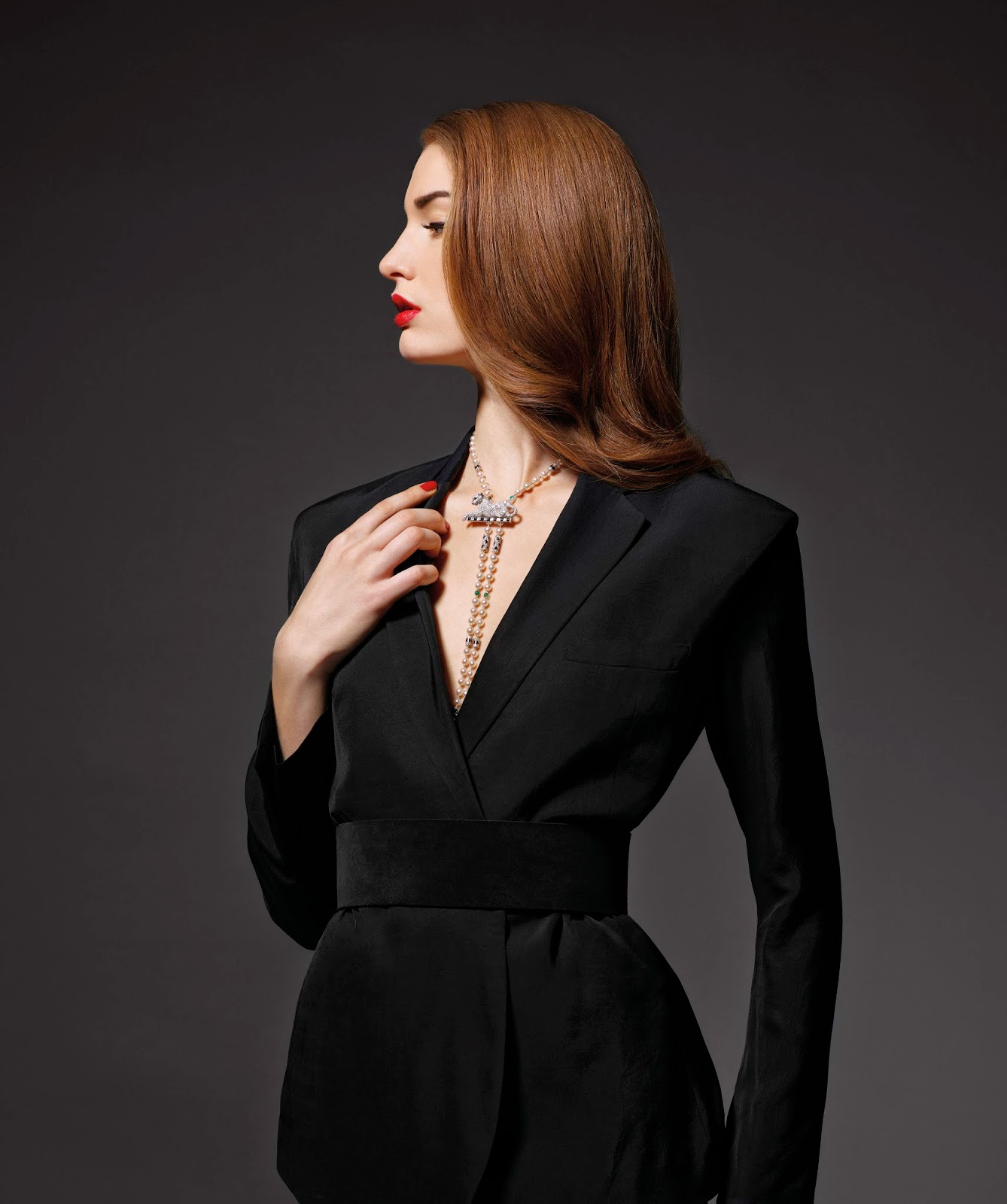 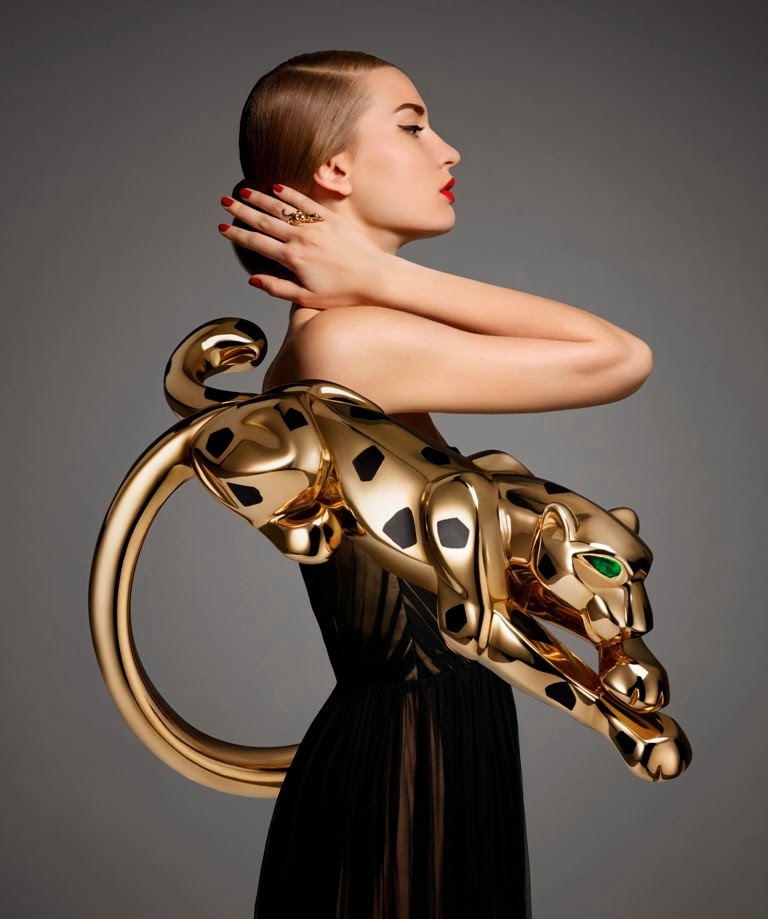 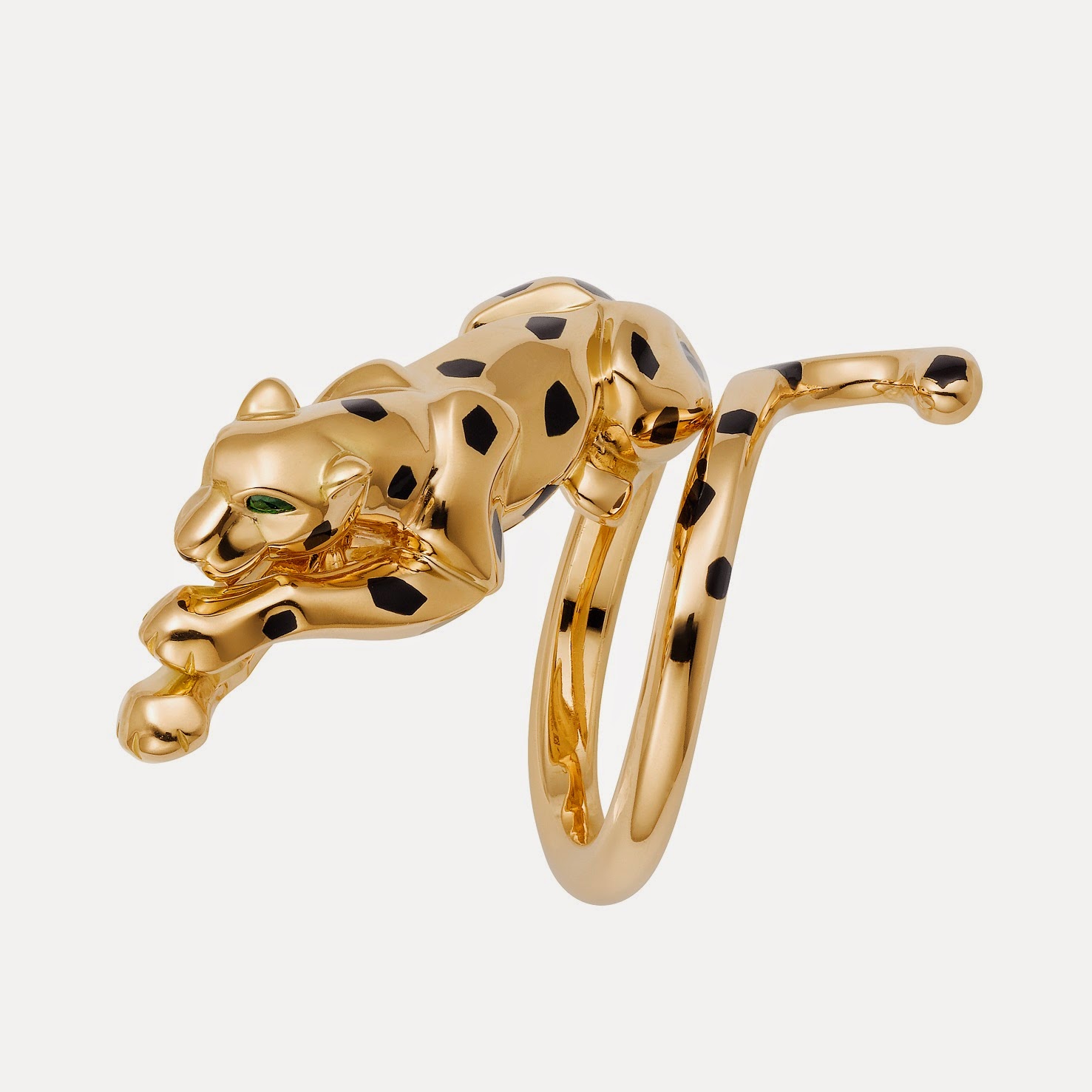 Because it makes its mark, its appearances instantly distinguish a style. The 2014 Cartier
panther is once more distinguished by its phenomenal and modern presence. Even on its
own, its charm is arresting.
Figurative, graphic, playful, gentle, wild, sensual, ferocious or kinetic, it offers a range of
surprises, loyal to its audacious and sophisticated jewellery aura.
Fifty-six pieces. A collection which the heroine reigns over with absolute feline essence.
Magnificent as a “vanity” ring, like an x-ray of itself in a gold skeleton.
Devastating when it gives an elegant and slender shock from one finger to another.
Op Art in its absolutely cellular version... A jewellery pattern of diamonds and onyx
spots without body or head on a tribal bracelet.
Jewels made with tremendous know-how that take their creative vitality from the energy
of Cartier’s totemic wild cat. 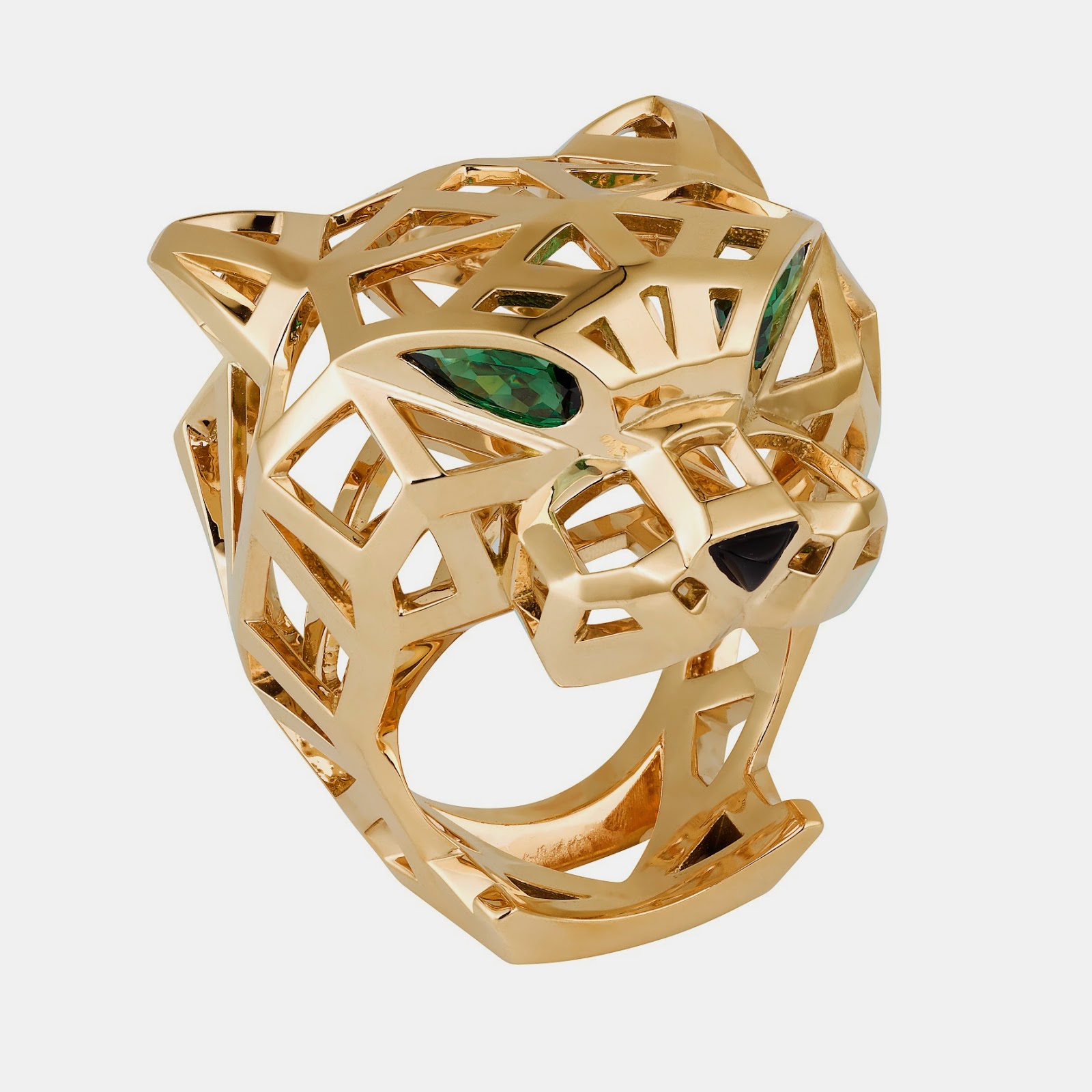 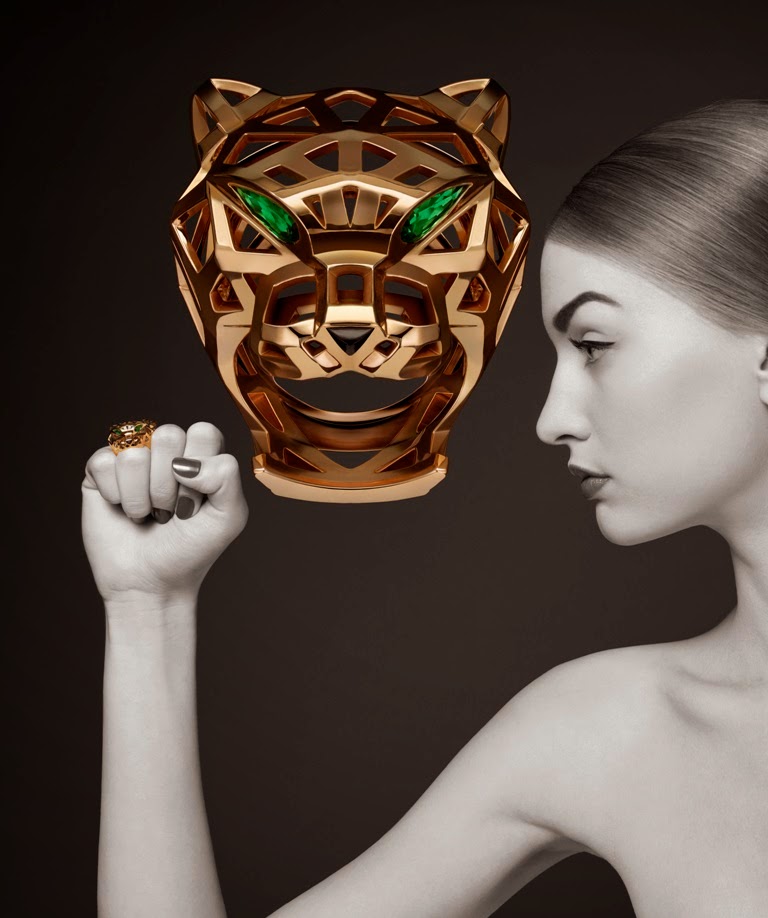 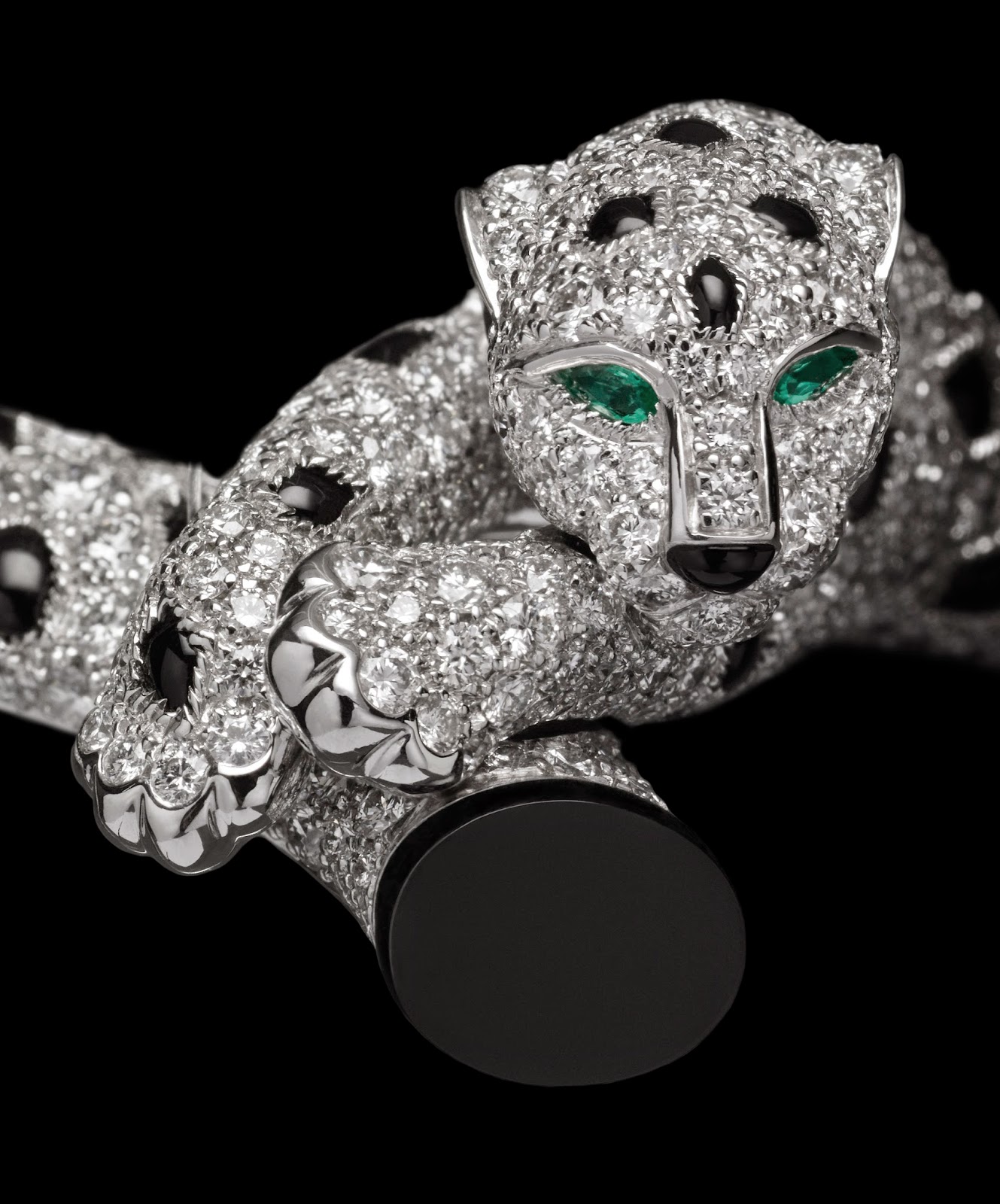