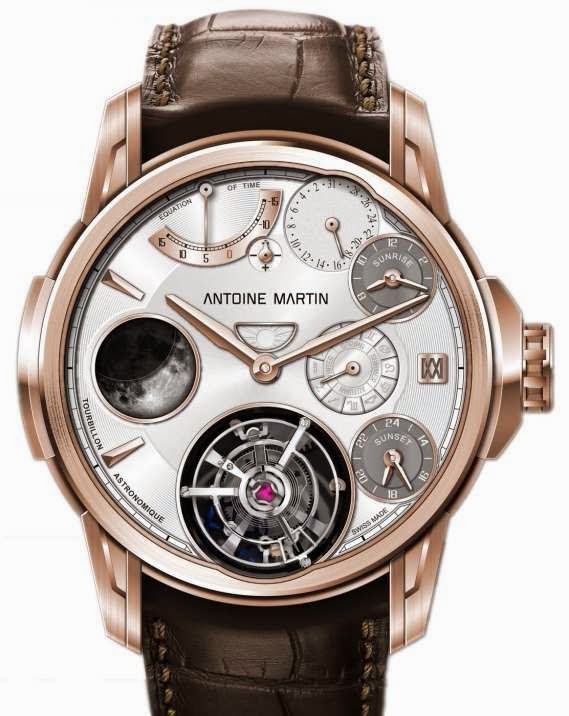 MARTIN BRAUN'S PASSION FOR ASTRONOMIC DISPLAYS HAS ALWAYS BEEN ONE OF THE TRADEMARKS OF HIS CRAFT. AFTER HIS CREATION OF A SERIES OF EXQUISITE IN-HOUSE MOVEMENTS, THE LOGICAL CONSEQUENCE WAS TO COMBINE THIS EXPERTISE WITH A TOURBILLON. THE RESULT IS ANOTHER MARRIAGE OF SELDOM-REALIZED COMPLICATIONS WITH UNUSUAL GRAPHIC ELEMENTS.

The prerequisites for the venture were all in place: his fabulous tourbillon had already proved its efficiency and reliability in conjunction with a Perpetual Calendar. An ultra-precise mechanism with a highly efficient silicium escapement, it was virtually predestined to be the driving force behind a host of astronomic complications. These comprise:

- Sunrise and sunset display, adjusted to a location of the customer's choice
- Display for the sign of the zodiac and season
- Date display
- Equation of time display
- Retrograde moon with moon phase display
- Day and night display

On the reverse side you find:
- Power reserve display
- Declination display, featuring a graphic and the degrees in figures
- Polar shadow line

One of the main priorities throughout was user-friendliness. The development team hit upon a solution that enables the sunrise and sunset times, the sign of the zodiac and season, the equation of time and the declination display to be set when the crown is in the rapid-setting position. Only the date and moon phase displays require a correction button.

THE FUNCTIONS IN DETAIL

The sunrise and sunset display
This is Martin Braun's astronomic display par excellence and has emerged from years of intense study. In purely theoretical terms, sunrise and sunset within a given latitude and a 15°- wide zone of longitude occur at different times for every location, except at the vernal and autumnal equinoxes. For this reason, establishing the correct times for every customer calls for a wealth of complex calculations. The control cams are individually produced on the basis of these calculations before being integrated into the movement. The displays appear in the two subdials at 2 and 4
o'clock, respectively.

The development team is especially proud of the fact that the times can be set so easily. Every watch is supplied with a table from which the customer can read off the times for the location of his choice.
Since sunrise and sunset occur at the same time twice a year, all we need to know is the current sign of the zodiac or the season. After pulling the crown out to Position 2 (rapid setting), the user simply turns it to set the times of sunrise and sunset. If he stops turning the time shown in the table during the correct season, the times are automatically synchronized. And that is not all: because the Equation Of Time display and the declination displays synchronize themselves with the polar shadow. This reduces setting of the watch to a minimum and makes the watch particularly easy to use.

The display for the sign of the zodiac and the season
As described above, the main purpose of this display is to simplify setting the system. However, many individuals have a strong affinity to the signs of the zodiac and are deeply fascinated by astronomy. Enormous importance was attached here to the graphical interpretation with its three-dimensional elements. A version with a correct display of the seasons is available for customers who live in the southern hemisphere.

The date
The date display can be found at 1 o'clock. Unfortunately, there was no room for a Perpetual Calendar because the complex control mechanism for the astronomic displays took up all the available space. The mechanism is set using a correction button. Finding a position for the date display was difficult and, ultimately, only possible here. We therefore decided to enlarge the date display and take it into the edge of the glass, which has made it much more legible.

The Equation Of Time display
This is one of the classics of astronomic displays. The earth's orbit of the sun is an ellipse with the Sun at one of the ellipse’s two foci (the First Law of German mathematician and astronomer Johannes Kepler, 1571-1630). The resultant effect is that the Earth has different relative speeds (Kepler's Second Law) despite the fact that it completes its rotation in 23 hours and 56 minutes. It is, therefore, possible that when a standard timepiece shows 12 noon, the Sun reached its zenith around 15 minutes earlier; or, conversely, that it will take another 15 minutes or so for it to reach its highest point. As previously mentioned, setting the watch is synchronous with sunrise and sunset times.

The retrograde moon phase and moon phase display
The retrograde moon phase display is another of Martin Braun’s inventions. Space constraints and the tourbillon cage ruled out a conventional rotating moon phase disc. It is replaced here by a semi-transparent shadow that gradually
moves across the moon until new moon (i.e. when no crescent is visible). At this point, the disc changes direction and moves the other way until it reaches full moon. The moon phase display indicates whether the shadow is moving towards full moon, i.e. waxing (+) or towards new moon, waning (-).
The moon disc itself is very natural and realistic-looking. The shadow-like disc does not blot it out entirely but is semitransparent. This means that the contours and craters of the moon are still visible, as in the night sky. The moon itself is hand made of solid sterling silver and depicts all the Moon's most important craters and seas as naturally as possible. The lively interplay of the individual components leaves conventional moon phase displays far behind.

The reverse side of the watch
Here we see the power reserve. Like the Tourbillon with Perpetual Calendar, this too is six days. In the same place, we find a unique plaque, which is made especially for individual customer and shows the geographic coordinates on the basis of which the sunrise and sunset times are calculated and adjusted.

The declination display
The last of the astronomic displays is Declination, which features very rarely in watches of this kind. Expressed simply, a Declination display indicates the latitude at which the sun at 12 noon stands 90° above the horizon and at which a stick standing upright in the ground would cast no shadow. In other words, the red line moves up and down between the Tropics of Cancer and Capricorn in the course of the year: or between 23.5° northern latitude and -23.5° southern latitude. Declination is required for navigational purposes and is used with right ascension to locate heavenly bodies.
The red line is a graphic depiction of Declination, while the value is shown numerically on the left-hand side of the world map. At the same time, we see the polar shadow; i.e. the area in which the sun does not rise. The world map is projected onto glass using a special graphic process known as quadrichromy. It has been specially prepared and treated to convey a high-quality, three-dimensional impression. As mentioned, the Declination does not need to be set separately but is automatically shown with the sunrise and sunset displays. 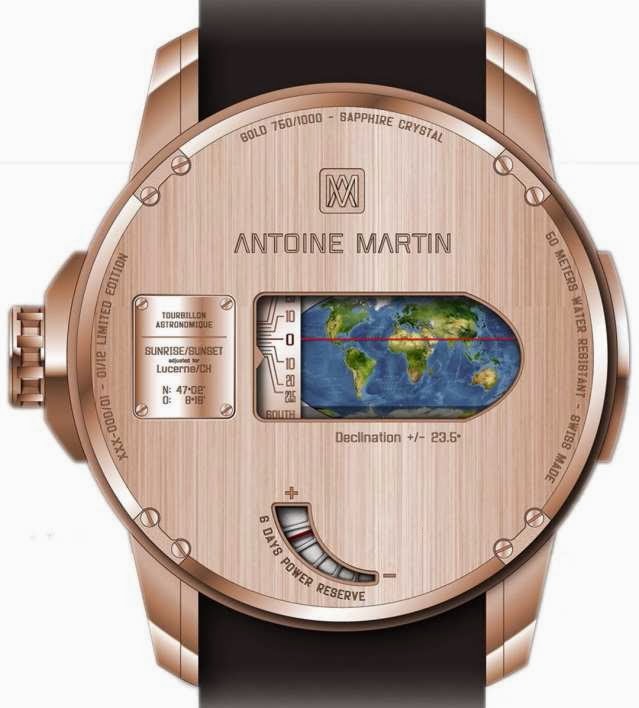