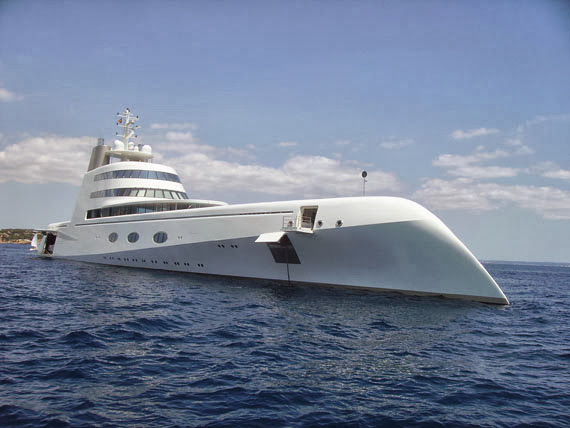 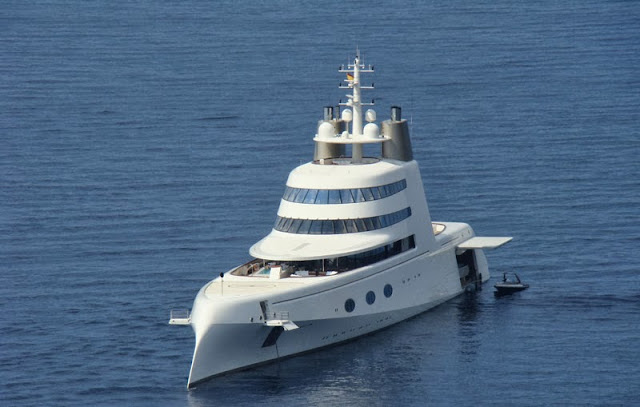 Andrey Melnichenko owns the Motor Yacht A, which was launched in the Summer of 2008 following a four year build. The yacht was designed by Philippe Starck and Martin Francis and built at the Blohm + Voss shipbuilding yard near Hamburg, Germany. A 300 million Yacht... 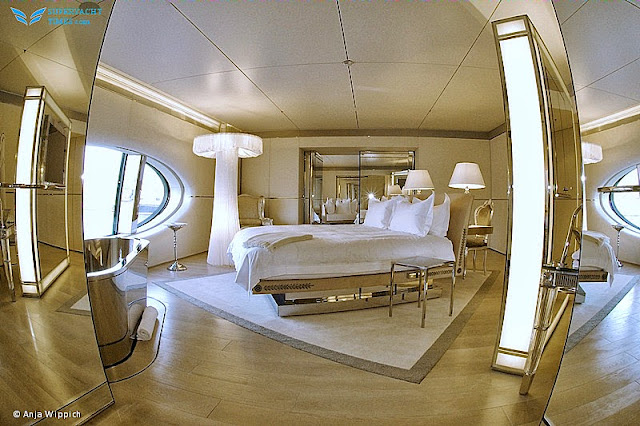 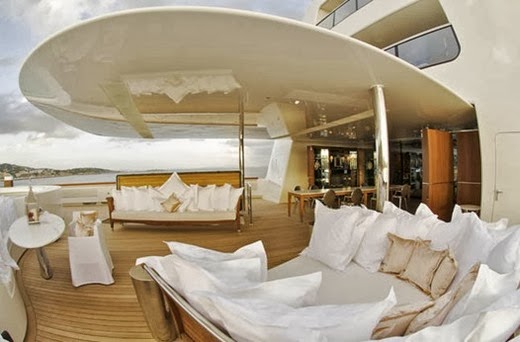 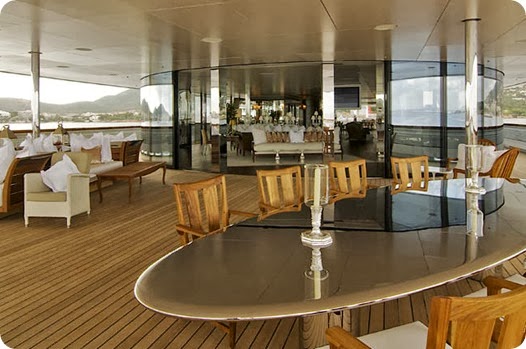 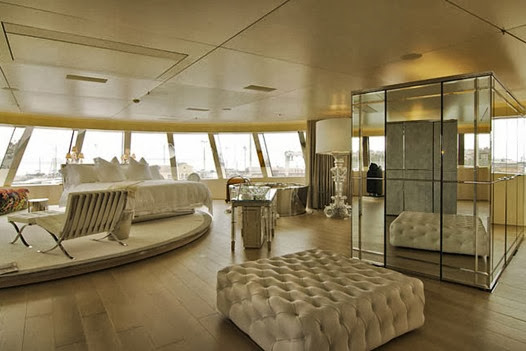 M/Y "A" is a luxury motor yacht designed by Philippe Starck and Martin Francis, and constructed by Blohm + Voss at the HDW shipyard in Kiel, Germany. It was commissioned in November 2004, and delivered in 2008 at a rumoured cost of $US300 million. With a length of 119 metres (390 ft) and displacing almost 6,000 tonnes, it is one of the largest motor yachts in the world.

Named for the first initial of its owners, Andrey and Aleksandra Melnichenko, its provocative styling has polarized opinions since its launch. It has evoked comparisons with submarines and stealth warships, while commentators have referred to it as the "most loved and loathed ship on the sea".
In common with many mega yachts, little was known about A when it was first commissioned. Builder Blohm + Voss issued a press release in December 2004 identifying the vessel as Project Sigma, which was how it became most commonly known during its construction.

Its length was given as 118 metres (387 ft), a metre short of its final length, while conceptual designer Philippe Starck and lead naval architect Neil Wade were credited personally. Starck was alleged to have taken only three and a half hours to come up with the final shape, whose reverse bow and tumblehome design has drawn parallels with the Zumwalt class of stealth destroyers designed for the US Navy.

It was also stated in the press release that the owner of mega yacht Pelorus—Russian billionaire Roman Abramovich—was not the customer behind Sigma. Nevertheless, because Pelorus was undergoing a concurrent refit at the same shipyard, and because both projects shared the same management company, there was continued speculation that the two vessels had a common owner throughout A's construction. Melnichenko was not confirmed as the true owner until after the ship was delivered in July 2008.

In interviews for Yachts International and Die Zeit magazines, Starck gave details of the vessel's most innovative features. He described it as a "stealth yacht" with a very smooth hull design, which left almost no wake at 25 knots (46 km/h; 29 mph). Its "purity" was, he said, a reflection of its owner, a "young and brilliant mathematician". (Melnichenko is a reputed maths prodigy.) Martin Francis, the boat's technical and naval designer, was also interviewed for Yachts International in 2008, and he too cited the boat's efficiency through the water and its small bow wake as a major innovation. Francis explained that typically the shipyard will do the hull testing, but in A's case a model was built and tested in the Solent estuary early in the design process, long prior to the involvement of any builders.

A is powered by two MAN RK280 diesel engines providing approximately 9,000 kW (12,000 hp), sufficient to give the yacht a maximum speed of 23 knots (43 km/h; 26 mph).[4] At its cruising speed of 19 knots (35 km/h; 22 mph) it can cover 6,500 nautical miles (12,000 km; 7,500 mi) in under sixteen days before its 750,000 L (160,000 imp gal; 200,000 US gal) fuel tank is empty.
Typically for a mega yacht, A is decorated, equipped, and staffed to an extremely opulent standard. There is almost 24,000 square feet (2,200 m2) of interior space, including 2,500 square feet (230 m2) for the master suite. Starck, known for his occasionally risqué design choices, also added a secret "nookie room" hidden behind mirrored panels. Mirrored surfaces feature extensively throughout the interior, along with Baccarat crystal which is used not only for the glassware and tableware, but for the furniture too. There are six guest suites, although they have moving walls and can be converted to four larger staterooms.

Much of the interior design was completed by Aleksandra Melnichenko who, as the owner's new wife, battled with designer Starck over features commissioned when her husband was still a bachelor. The original discothèque was down-sized, while the suites' decor was toned down, although it still included leather or white stingray hides on the walls and ceilings, and crocodile-skinned furniture. Above-deck there is a helipad and swimming pool forward of the superstructure and two more pools aft, one of which is glass-bottomed and can be viewed from the below-deck disco.

37 staff are employed on the vessel, and there are living quarters for five more staff accompanying the owners or their guests. Security is tightly controlled, with 44 mm (1.7 in)-thick bomb-proof glass in the windows, over 40 CCTV cameras, motion sensors, biometric fingerprint/keypad entry for restricted areas, and a rumoured escape pod in case of emergencies.

Aside from the yacht itself, the two main tenders—one open and one covered—and a third sports tender have also been designed by Starck, and built by Vaudrey Miller of New Zealand. They are all 10–11 metres (33–36 ft) long, and reputedly cost $1 million each. The total cost of A has never been officially confirmed, but $300 million has been the most frequently cited estimate. In WIKIPEDIA 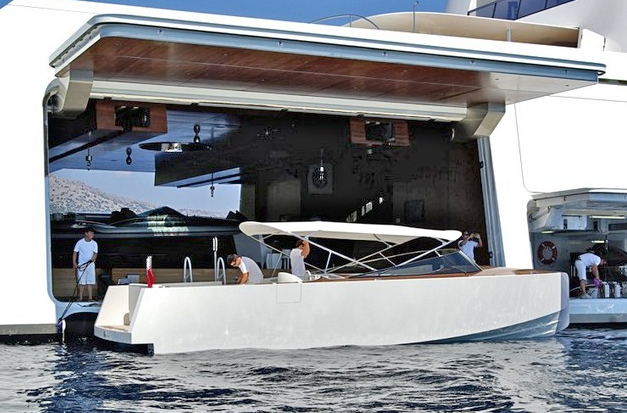 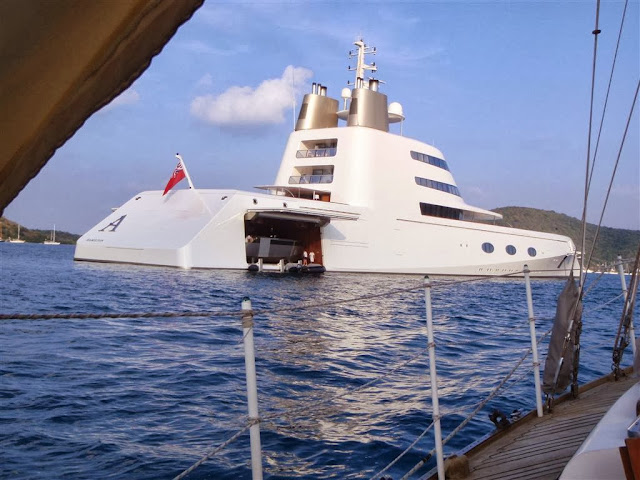 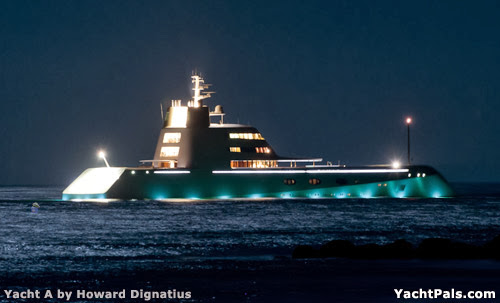