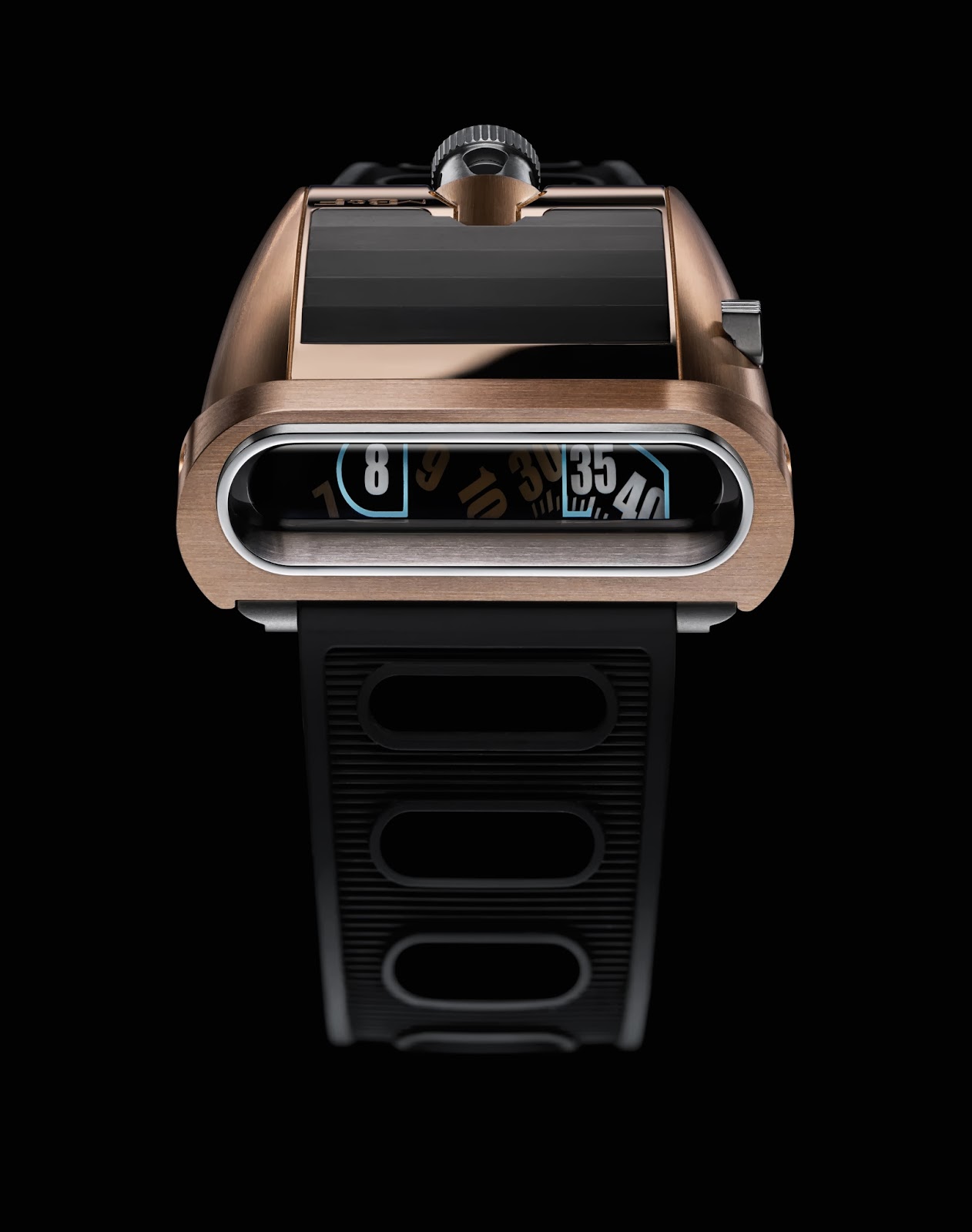 HOROLOGICAL MACHINE No5 RT
HM5 RT has a mechanical movement, but inspired by an era when quartz was King.
The rear louvres on supercars block light, but on HM5 RT they let light in.
Befitting its automotive heritage, HM5 RT has exhaust pipes, but they drain water.
The gold endowing the HM5 RT case with such a rich lustrous glow was found on earth, but
was actually created billions of years ago in deep space.
The last couple of decades have seen an exponential growth in inventions that have
revolutionised our lives. In fact, there have been so many incredible new machines that we
have become blasé about innovation. Robots may not cook dinner, but they do build cars,
vacuum the home and mow the lawn. Sending a man to Mars is more a question of economics than engineering.

Horological Machine No5 RT was inspired by an earlier time when we were not quite as blasé
about technology as we are now: the 1970s. Imagine the excitement and dreams of the future back then. Man could fly on the road with a new genre of streamlined supercars; fly on the sea with hovercrafts; fly at supersonic speeds on Concorde; and fly to the moon in Apollo. Everything seemed possible: humanoid robots, personal jet-packs and flying cars were surely just around the corner. In the 1970s the future wasn’t tomorrow, it was today! While we might still be waiting for flying cars, with HM5 RT you can put a high-tech golden supercar on your wrist! 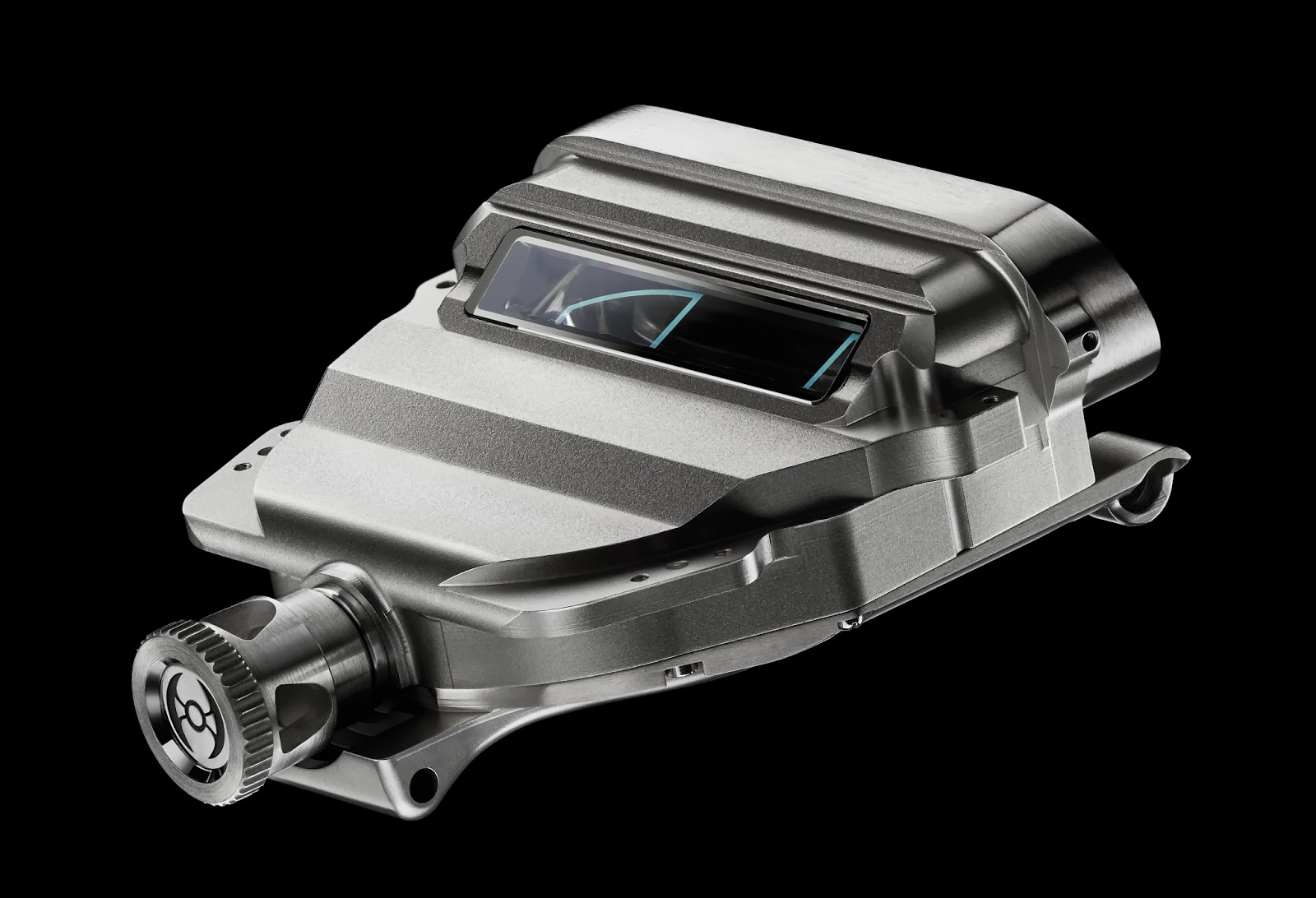 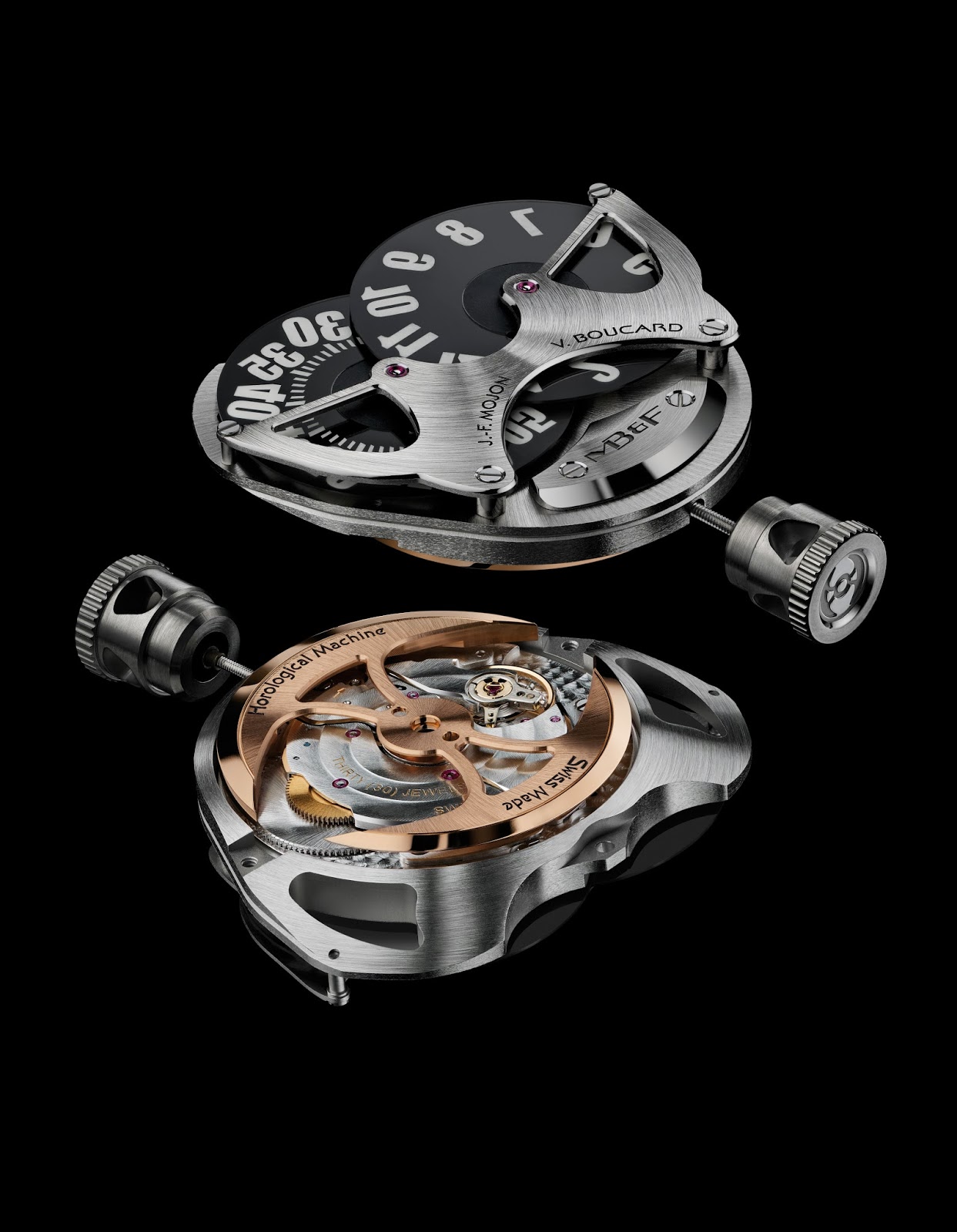 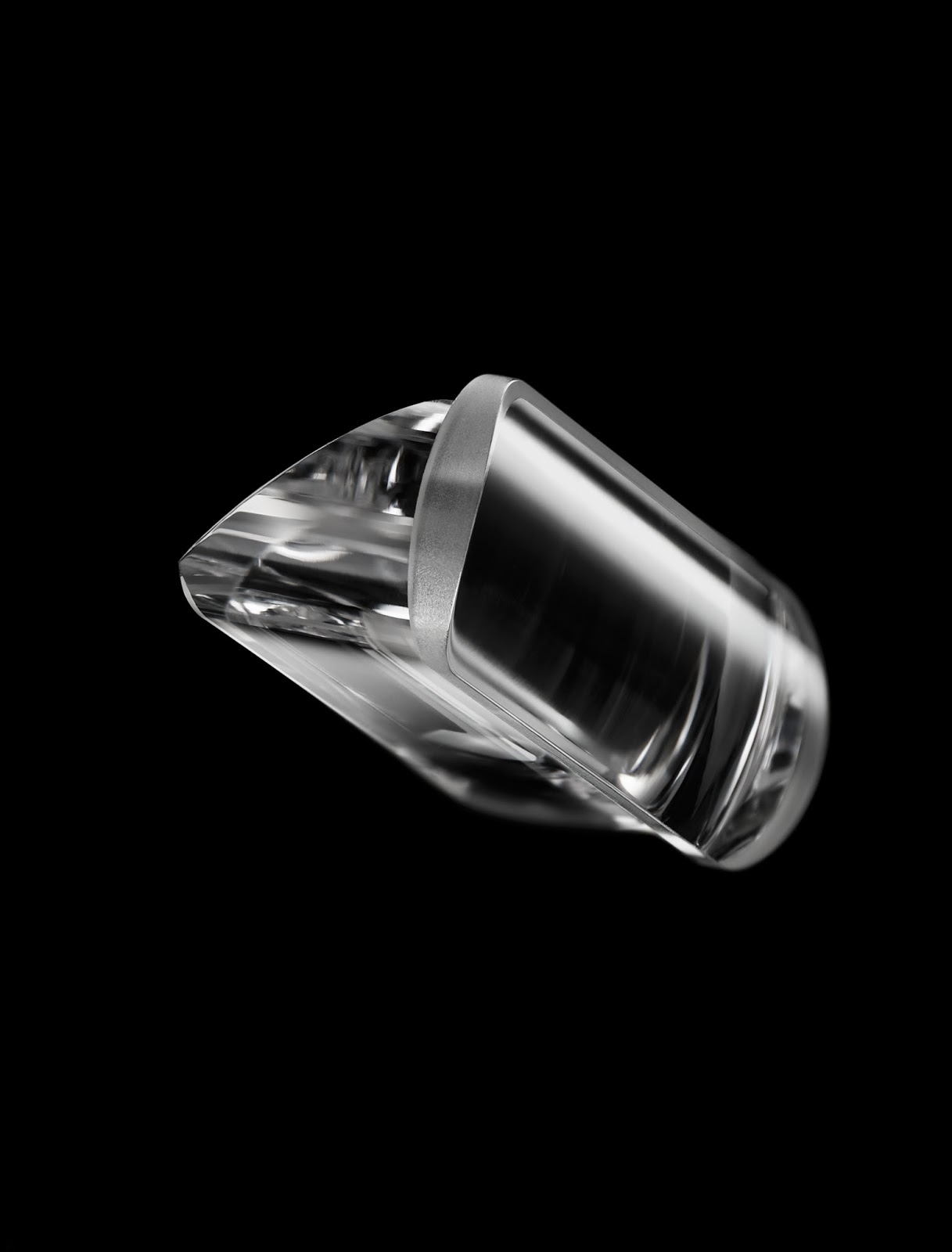 A deep-brush case finish brings out the lush richness of the 5N red gold and the warmth of
the precious metal creates a perfect juxtaposition with the cool electric-blue trim around
the time display. Grade 5 titanium flanking the lower sides and base of the case both highlights and softens the formal nobility of the red gold.
While HM5 RT has a generously sized 51.5mm x 49mm case and gold is known for its weight
as much as its beauty, thanks to the discrete use of ultra-light titanium, HM5 RT is a very
comfortable machine to wear. HM5 RT is a luxurious limited edition of 66 pieces in 5N red gold and titanium.

LIMITED EDITION OF 66 PIECES
For MB&F founder Maximilian Büsser, growing up as a child in the 1970s meant living in a
constant state of awe and wonder. Supersonic jets flew through the air and through space;
American muscle cars dominated the silver screen in road movies and fuelled the imagination.

The Lamborghini Miura launched a new genre of supercars that looked as though they could
break the sound barrier while standing still (creations that led the young Max to dream of
being a car designer). Lasers, transistors, microwaves, hovercrafts and jet-packs gave the
impression that the difference between science fiction and science fact was just a matter of
when, not if.

And with the arrival of quartz wristwatches, watch designs were transformed from looking
like something your grandfather wore, to something Captain Kirk might wear on the Starship
Enterprise. HM5 RT takes these childhood dreams and gives them a new lease of life by
putting them On the Road Again.

“Imagine telling somebody in 1972 that in 2012, most people would be wearing
round watches with round dials and three hands. That would sound crazier
and more far-fetched than the idea of living on Mars!” MAXIMILIAN BÜSSER
The unmistakable wedge-shaped case of On the Road Again is direct homage to the plucky
Amida Digitrend. However, it also has unmistakable references to the low-slung supercars
of the epoch.

The purpose of the louvres on these awe-inspiring cars was to restrict sunlight (and heat)
from entering the near horizontal rear window. The functional louvres on HM5 do the
opposite in that they open to allow light down onto the Super-LumiNova numbers on the
hours and minutes indication disks to charge them. The disks are actually flat on top of the
movement (under the louvres), not vertically at the front of the case where they appear to
be thanks to some optical magic. 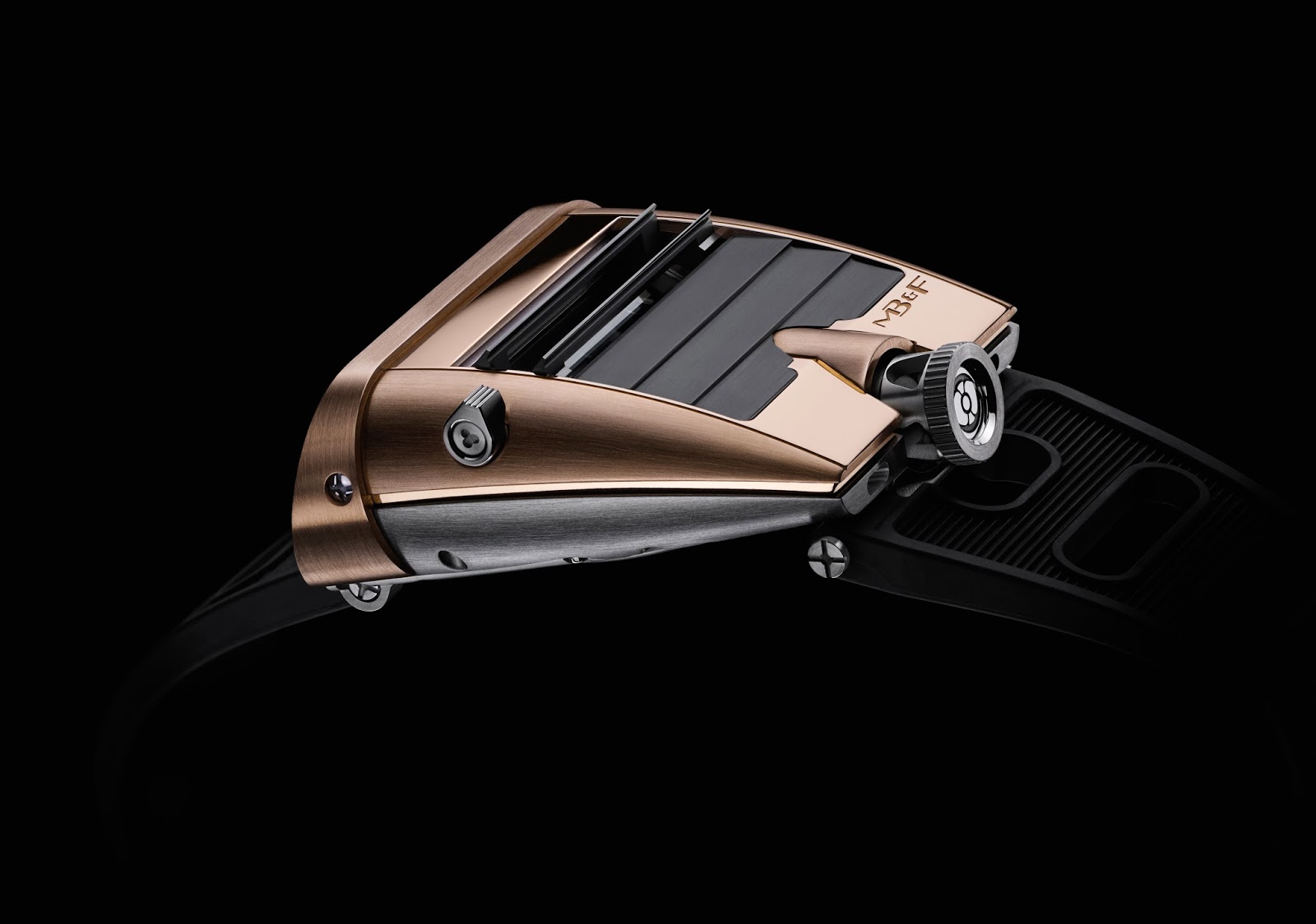 Opening and closing the louvres also changes the dial’s light intensity. The louvres are opened and closed by a slide set into the side of the case. Another distinguishing feature of supercars are large dual exhaust pipes that are usually seen accompanied by a roar of engine noise and smoking rubber. But HM5’s exhausts are not there to expel combustion gases in a throaty roar, but to drain water in case – like James Bond’s Lotus in ‘The Spy Who Loved Me’ – HM5 RT gets wet.
And no futurist icon of the 1970s is complete without a jet. HM5 RT’s ergonomically sculptured crown – inset with the MB&F battle-axe motif – looks as though it could just as easily power a rocket to the Alpha Centauri, or the Batmobile, as it powers On the Road Again into the future. To minimise potential damage, the crown winding stem is guided by three radial bearings. It can only be pulled/pushed when perpendicular to the movement. 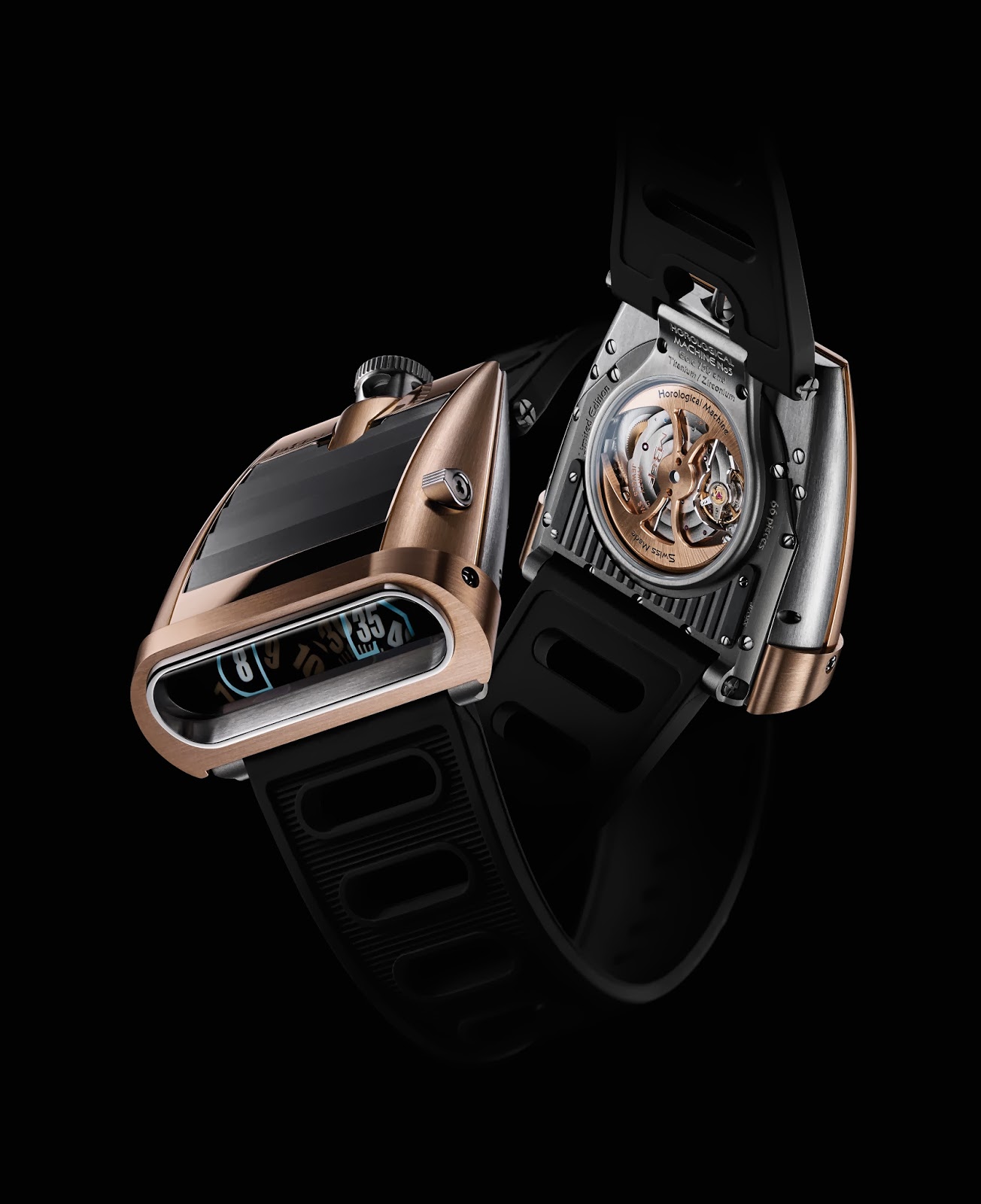