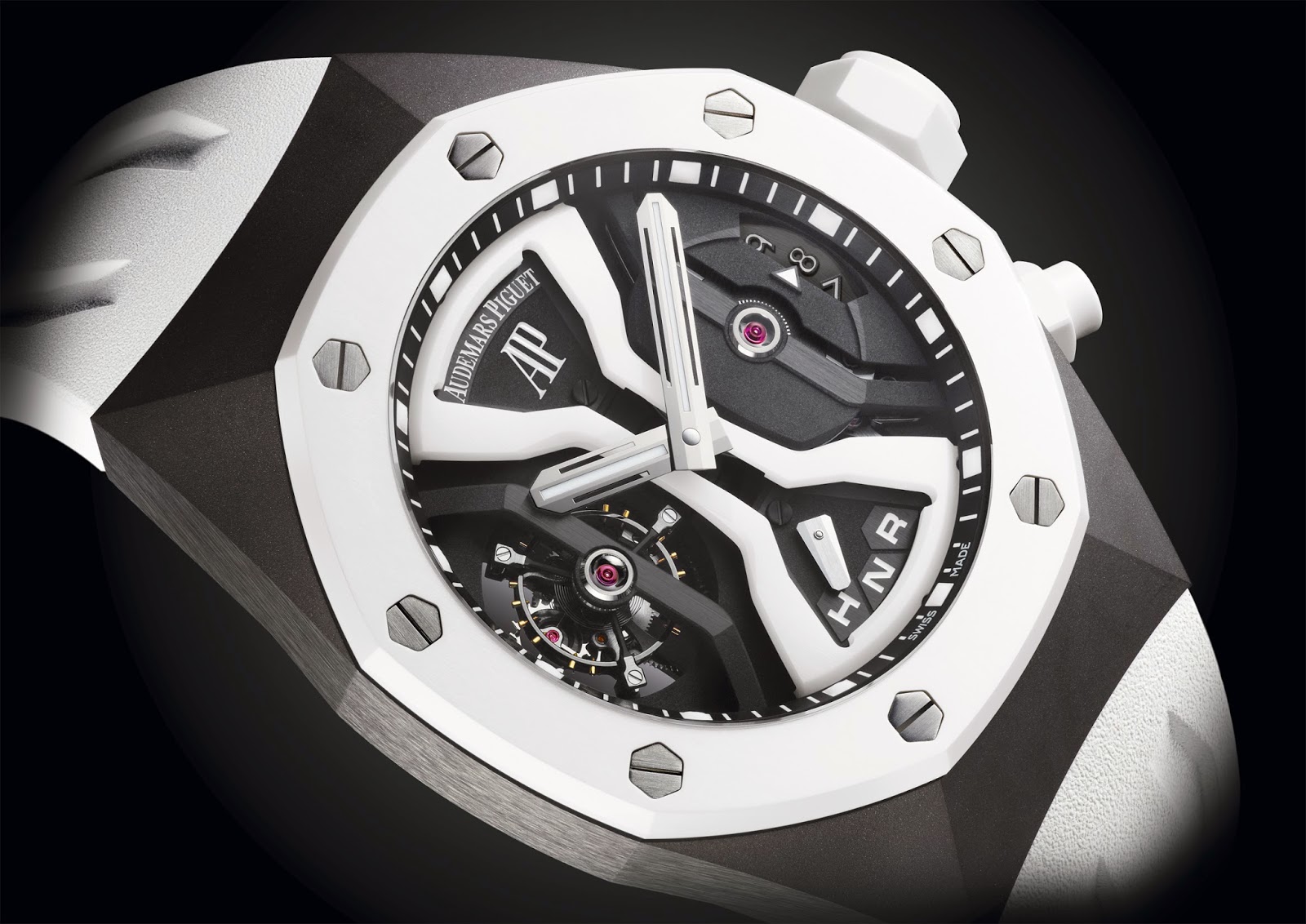 The Audemars Piguet Royal Oak Concept GMT Tourbillon Its sculpted titanium case middle and integrated rubber strap combine with a white ceramic bezel to frame the highly architectural array of tourbillon carriage and second ‘GMT’ time-zone display inside – case and movement in perfect harmony. New for 2014, however, is the flash of pure white centrestage: an intricately machined upper bridge made of white ceramic – only possible now, thanks to Audemars Piguet’s ongoing advances in materials science.

THE CONCEPT EVOLUTION
The Royal Oak Concept was first unveiled in 2002 as an avant-garde, 30thanniversary tribute to Audemars Piguet’s legendary octagonal Royal Oak – designed by Gérald Genta as the world’s first luxury watch in stainless steel. Not quite a Royal Oak, not quite na Offshore, the Concept’s ultra-hard Alacrite 602 case was more rounded to highlight Genta’s signature octagonal bezel and its eight hexagonal screws. The dial was left off, exposing the advanced micromechanics ticking within. All these revolutionary design codes have persisted throughout the Concept series, from 2008’s Royal Oak Carbon Concept Tourbillon and Chronograph – an ultra-light timepiece that was the first to combine a forged-carbon case and movement mainplate – to the Royal Oak Concept GMT Tourbillon of 2011, with ultra-light, ultra-resistant titanium case and black-ceramic octagonal bezel, pushpieces and crown.

First unveiled in 2002,
the Royal Oak Concept was considered as na avant-garde timepiece 13 Ceramic is na almost totally Scratchproof composite material that can be scratched only by diamonds. This year’s Royal Oak Concept GMT Tourbillon features a white ceramic bezel, crown and pushpieces instead of black, all heightening the contrast with the titanium case middle. However, in typical, trailblazing style, the Manufacture has now gone one step further and incorporated ceramic into the movement itself, replacing the blackened upper bridge of Calibre 2913 with white ceramic. As a result, the new Calibre 2930 is visually transformed, its dazzling, hourglass-shaped bridge further enlivened by the double symmetry of the tourbillon bridges and GMT display. 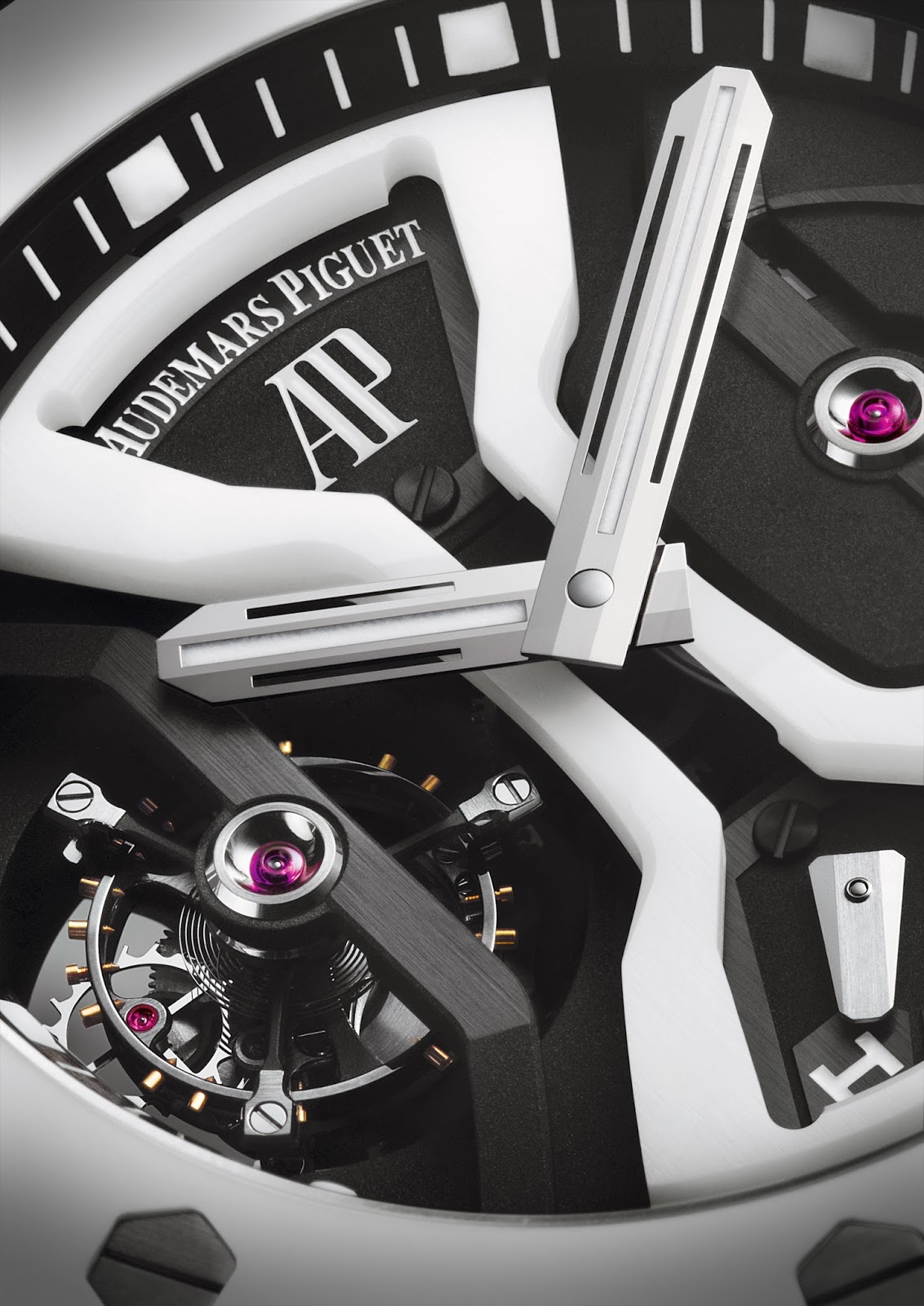 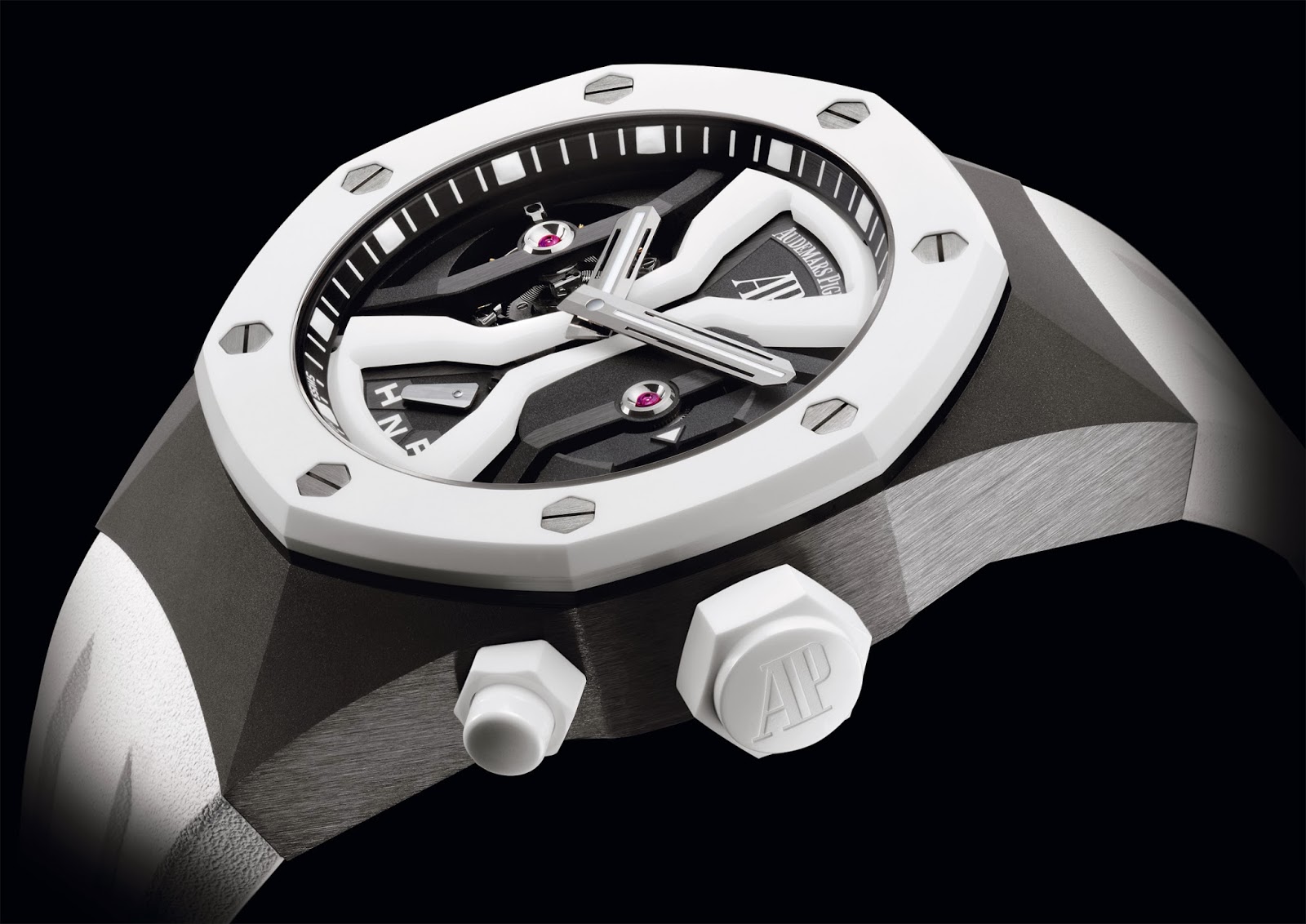 Ceramic is an almost totally scratchproof composite material that can be scratched only by diamonds, calling for the use of special milling-cutter machines equipped with diamond-tipped tools. Treating the roughedout surfaces and edges to a polished or satin-brushed finish represents a daunting technical challenge, due to ceramic’s inherent resistance to abrasion. To give an idea, it takes around 8 hours to make the Royal Oak Concept GMT Tourbillon’s bezel, compared with 45 minutes if it were steel, calling upon all the savoir-faire of the watchmakers and engineers. As well as giving an exceptionally smooth final appearance, ceramic has a practical purpose, displaying extreme resistance to wear.

Similarly, the titanium used for the case middle and sapphire surround is ultra strong, comfortable to wear and twice as light as steel – advantageous for a watch of such generous 44mm proportions. Further demonstrating Audemars Piguet’s deeply entrenched knowledge of high-tech metals and materials, the inner flange circling the dial is made of lightweight
aluminium, hardened by anodisation.

This daring cocktail of ceramics and metals is just the latest chapter in Audemars Piguet’s ongoing quest to push the envelope when it comes to materials science – a quest that started over 40 years ago with the Manufacture’s most daring move of all, using steel in a luxury watch for the very first time.

TECHNICAL TOUR DE FORCE
The defining characteristic of Audemars Piguet’s Concept watches has always been the coherence of case and movement. The ultra-modern ‘engine’ is seamlessly integrated within its ultra-modern ‘chassis’, whose techy aesthetic perfectly complements and showcases the exposed micro-mechanics. 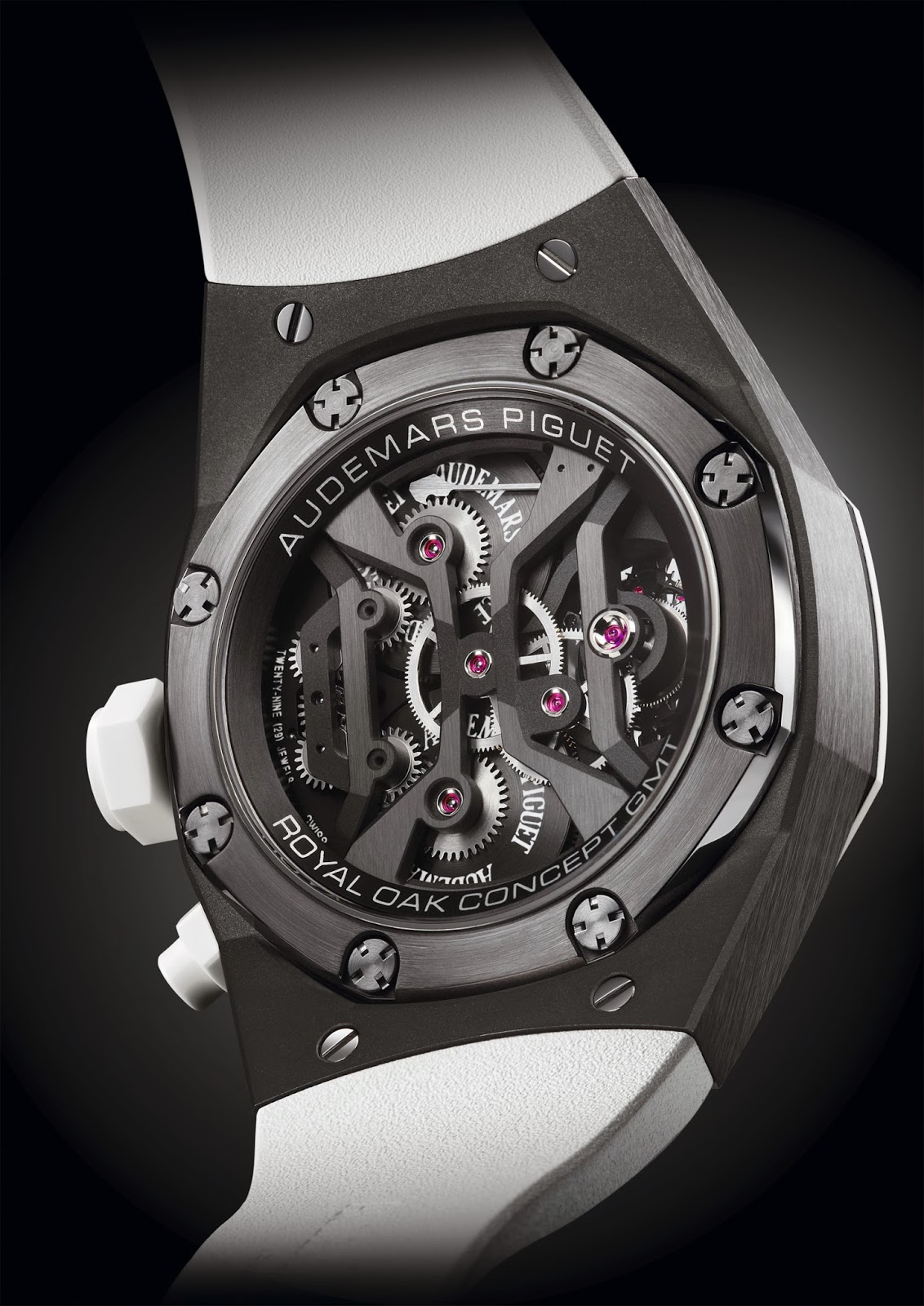 Its timekeeping is regulated by a 3Hz (21,600vph) escapement, rotating inside a tourbillon carriage every 60 seconds, compensating for the effects of the Earth’s gravity when the watch is oriented vertically for any length of time.

The tourbillon cage comprises 85 components, yet only 0.45g in weight. An experienced watchmaker spends almost three days assembling its components, including two full days to install the cage, while the full workings will require over two weeks of work. Audemars Piguet is still one of the few manufactures to have mastered all the intricacies of this complication, with over 25 different movements featuring a tourbillon. Each component is bevelled, polished, assembled and balanced by hand.

The GMT display provides an instant reading of the time in a second timezone.
It is adjusted using the pushpiece at 4 o’clock (one press adjusts the time by one hour). The indication of the second time-zone, based on 12 hours, comprises two superimposed discs, making it easy to tell the time. The first, on which the figures are inscribed, completes one turn in 12 hours. The second, just below, completes a turn in 24 hours and has 2 coloured areas : a white half for daytime and a black half for night-time. This makes it easier to read the figures.

Audemars Piguet’s proprietary parallel double barrel system ensures the Royal Oak Concept GMT Tourbillon runs for as many as 10 days before it needs to be manually wound again, generating a constant force during some 237 hours of autonomy, enhancing timekeeping precision.

The energy from Calibre 2930’s two 10-day barrels is fed into the gear train at the same time via a single pinion bridging the two. This is a far gentler means of transmitting energy than the usual system of two series-linked 5-day barrels. It also reduces pressure in the gearing, the friction in the barrels is used to offset torque variations, and it gives increased running precision, greater power reserve and enhanced reliability.

The Royal Oak Concept GMT Tourbillon also features a selection indicator mechanism. According to the position of the winding stem, the hand positioned on the dial at 6 o’clock indicates the function selected. The H (Heure), N (Neutre) and R (Remontage) indications correspond to the three positions of the winding stem, meaning time-setting, neutral and winding respectively. 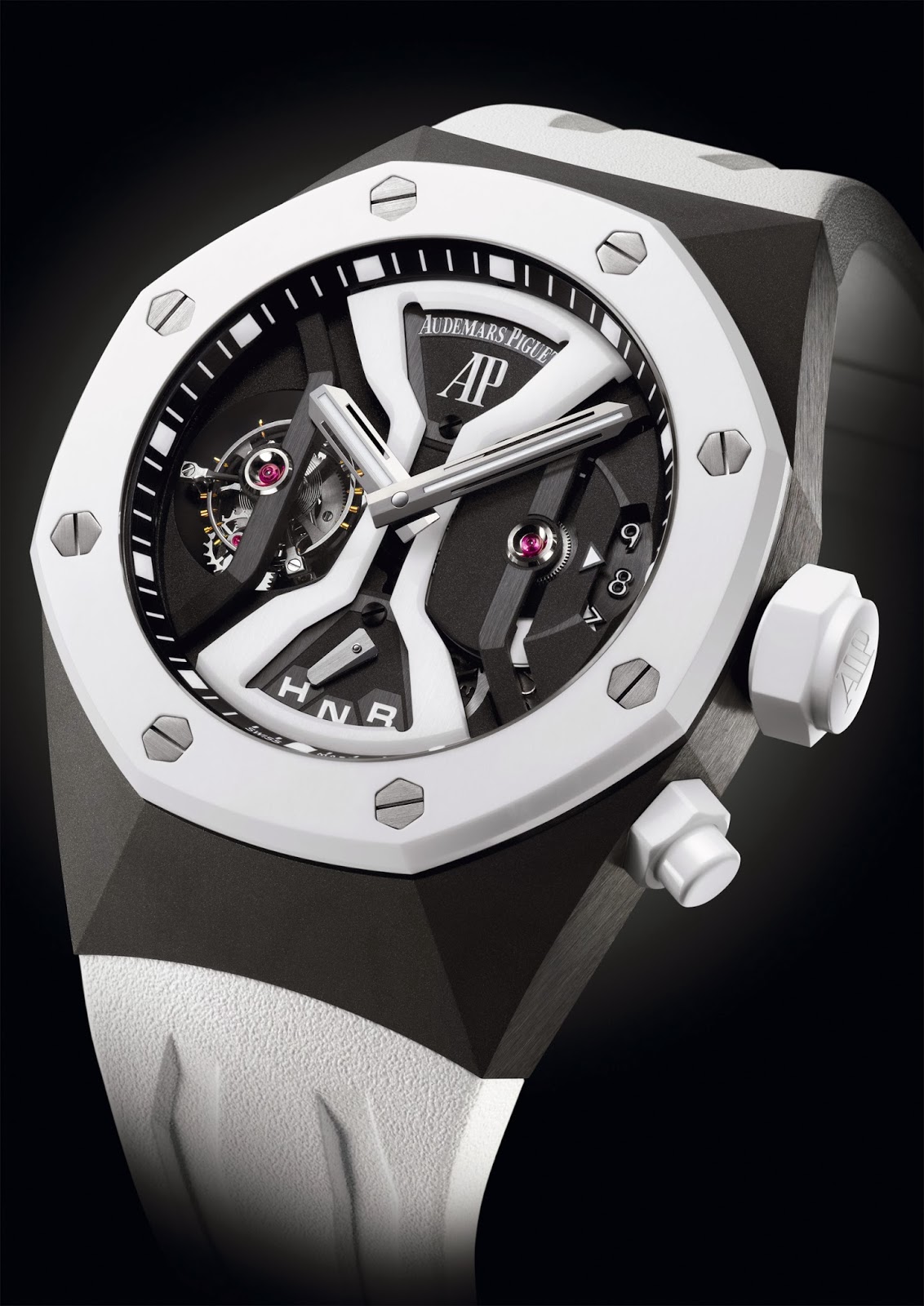