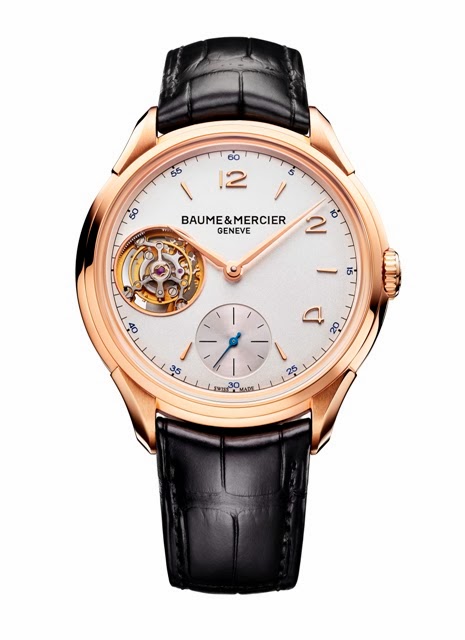 The SIHH 2014 salon sees the unveiling of Baume & Mercier’s Clifton 1892 Flying Tourbillon watch. This particular wonder, offered in a very exclusive edition of 30 pieces, aims to demonstrate the excellence of Swiss watchmaking and remind the world that Baume & Mercier, the seventh oldest watch manufacturer still in operation, has real expertise in the art of making accurate and complicated watches.

This new model included in the Clifton collection gives a fair idea of the true measure of Baume & Mercier’s art, expressed in its motto since the Maison’s founding in 1830: «Accept only perfection and only manufacture watches of the highest quality.» This timepiece, with its exclusive hand-wound caliber is the epitome of Haute Horlogerie.

The name of this high precision watch, regulated by a flying tourbillon, refers to the history of the Maison that won 10 grand prix and seven gold medals at various international exhibitions during the nineteenth century, won prizes in chronometry competitions and shone throughout the twentieth century with the quality of its construction and the aesthetics of its creations. But this very exclusive model is also an example of Baume & Mercier’s excellence in the art of etablissage, an ancient watchmaking practice dating back to before the first manufactures.

The Clifton 1892 Flying Tourbillon watch in 18K red gold stands out as an exceptional piece in the heart of the collection whose name it bears.

Driven by an exclusive manually wound mechanical caliber (P591) controlled by a flying tourbillon produced by the Val Fleurier manufacturer, this piece revives the tradition of the house offering visually attractive and highly accurate complication watches manufactured in the pure tradition of Swiss watchmaking. Its finish of the highest quality, with a winding ratchet wheel inspired by those on traditional pocket watches, the «Côtes de Genève» decorations on the bridges, beading on the main plate as well as traditional finishes of the various components, all assembled by the same watchmaker, are all displayed through the wide transparent sapphire glass.

This traditional timepiece, made following the rules of the art, has been designed to be perfectly adapted to the modern world. It has a power reserve of 50 hours. An opening at 9 o’clock in the silvered opaline dial, with its riveted 18K red gold numerals and indexes, offers a view of the delicate flying tourbillon carriage rotating once a minute, unobstructed by any bridge.

In creating the case for this large caliber, Baume & Mercier’s Design Studio made sure that this generously proportioned watch - 45.5 mm - fits perfectly on the wrist. The “chevé” shaped glass and curved lugs give a refined elegance to the studied style of the piece, matching the spirit of the collection. Complex and understated at the same time, the watch comes in a limited edition of 30 with a hand-sewn alligator strap, closed by a buckle. Enough to turn the heads of Haute-Horlogerie aficionados.