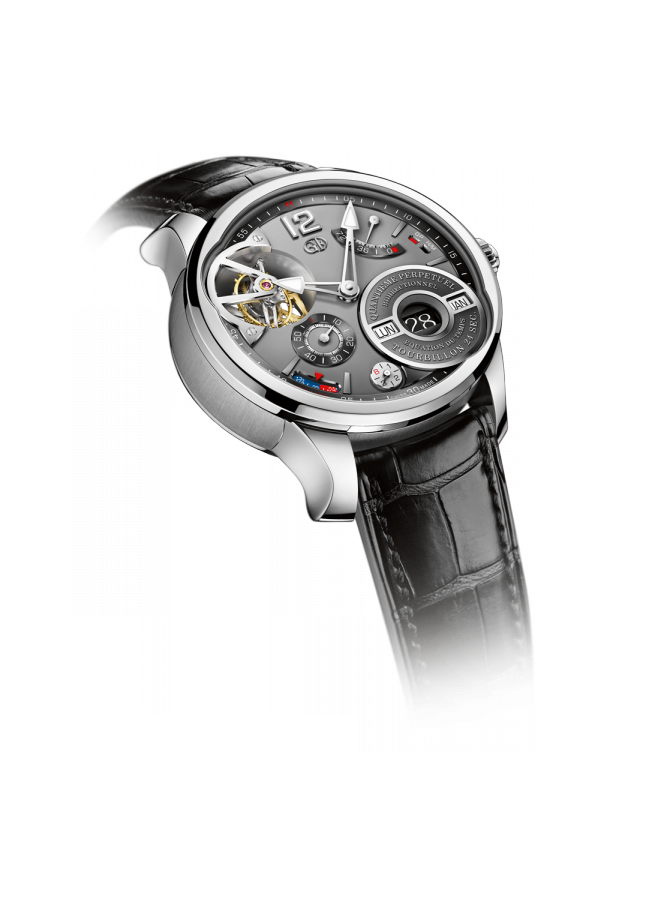 Greubel Forsey opens new horizons with a revolutionary interpretation of one of the oldest watchmaking complications — the Perpetual Calendar. The inventive watchmakers in La Chaux-de-Fonds have also incorporated the Equation of Time in a demonstration of how to add complexity of function while simplifying with clear legibility and easy operation.
Greubel Forsey has pushed beyond the previous limits of watchmaking, with no fewer than six major inventions, and a focus on ground-breaking inclined tourbillons. Now it’s time to reinvent the horological complication in the original sense of the term, and to show that in this area as well, watchmaking is in a perpetual state of evolution. The technically and ergonomically innovative Double Balancier 35° and GMT provided the springboard for this new take on the time-honoured perpetual calendar.

You do not need obscure instructions or a special tool for multiple pushers. If your timepiece has stopped for several days and you need to take an imminent flight, simply pull out the crown checking the selection indicator near 2 o'clock. Turn the crown back and forth to change the calendar and all the different indications change by themselves. If you go too far, you just go back through the days until you get to the right date. It’s easy, intuitive and pleasant to use.
To meet this technical challenge Greubel Forsey developed a sophisticated coding mechanism: the mechanical computer for which three patents were filed. A stack of cams with movable fingers shift the indications on the front and back dials of the timepiece, the complete mechanism fitting entirely within the movement without increasing its dimensions. The cam for the months changes the month in a window on the front display and also moves the Equation of Time scale on the back. The years' cam controls the leap year indication on the front and that of the seasons on the back. The development of this coding device not only overturns conventional ways of setting the indications but also by displaying them simultaneously on front and back dials.
Just a glance at the subdial at 3 o’clock clearly reveals the three in-line windows that clearly indicate the day, the date and the month. The large date makes the calendar extremely legible.

Equation of Time
The equation of time merits further explanation. Horology seeks to measure time as regularly as possible; however the Earth orbits the Sun in an elliptical path. As the Earth sweeps close past the Sun, the period between successive solar zeniths, or the solar day’s length, changes. This causes the difference between solar time and mean time to vary from a few seconds to as much as 16 minutes during the year. The Equation of Time is the conversion factor between solar and mean time. To read solar time, look at the back subdial for the displayed date’s Equation of Time.

In the spirit of the GMT, Greubel Forsey continues to put time to better service; where the back of the timepiece is not just there to showcase for fine hand finishing, but also provides a new way to tell the time. The most frequently sought calendar information, namely the day, date and month, is displayed in a line on the front dial. Information that is less often required is on the back of the timepiece.  Thus the two sides show indications that you need to know regularly on the front, and indications accessed less frequently on the back.

On the back of the QP à ÉQUATION you find the Equation of Time indication, the seasons and the current year in four figures.
The indications on the back are made up of two superimposed transparent discs in synthetic sapphire crystal. The first disc is driven by the date wheel and has a scale in minutes indicating the difference between solar and mean time.
The second disc, which goes around once a year, has a figure shaped like a manta ray, and divided into four sections in red and blue to show whether the Equation of Time is positive or negative. To find out, look where the red line (positive difference) or the blue line (negative difference) crosses the scale. This Equation of Time display is unprecedented and provides a clearer appreciation of the Earth’s elliptical orbit around the sun as well as the equinoxes and solstices

The QP à ÉQUATION in white gold measures 43.5mm in diameter and is 16mm high. It includes a fourth patentthe 24-second Tourbillon inclined at 25°, . The balance oscillates at 21,600v/h and the power reserve is 72 hours from two fast-rotation superimposed barrels that feature protection against excess tension. This leaves space for a large free-sprung balance. The movement diameter is 37mm(16.41 lignes), height 9.55mm  and comprises 570 components and 65 jewels
Publicada por Unknown