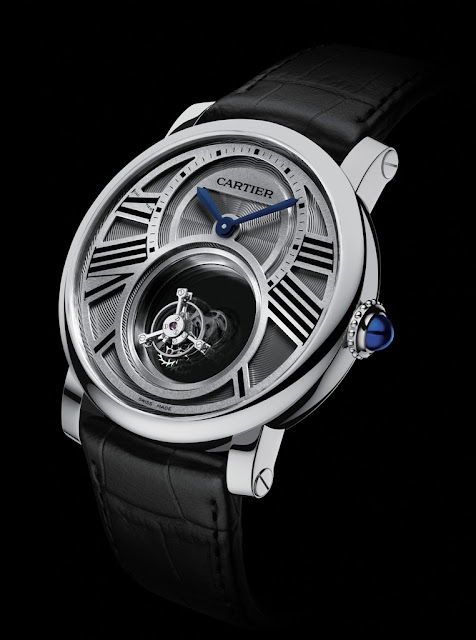 For over a hundred years, Cartier has been mastering mystery. Over time, this watchmaking ideal has led to the creation of Clocks and watches that crystallise the power of enchantment.
This year, Cartier presents two new watchmaking complications that push the frontiers of the mysterious yet further, continuing the founding tradition of the Maison. Inspired by the concept of transparency and hidden complexity, the watchmakers of the Cartier Manufacture confronted the challenge of bringing enthusiasts two new creations with clean lines that seem to glorify time with incredible lightness. The first mysteriously displays the hour and minutes with two hands that seem to float magically in space. The second focuses the attention on a mysterious double tourbillon whose floating cage performs a delicate and spellbinding dance.

Montre Rotonde de Cartier Double Mystery Tourbillon
Imagine a watch equipped with a tourbillon that seems to be suspended in space. That was the challenge taken up by Cartier with its new movement, the 9454 MC Double Mystery Tourbillon certified by the Geneva Seal. Slightly closer inspection will reveal the magic concealed in the mechanism. Indeed the flying tourbillon, which turns once on its own axis every 60 seconds, appears to be floating completely free in space, with no visible connection to any gear train. The illusion is complete when the same tourbillon cage starts to perform a second rotation at a rate of one turn every five minutes. This product of Cartier’s creative daring and watchmaking know-how, the Double Mystery Tourbillon, is the quintessence of over a century of mystery creations from the Maison.

Magic transformed into science
In its simple elegance, which masks unbelievable complexity, the Rotonde de Cartier watch highlights a totally original mechanical construction named “Double Mystery”. The watchmakers of the Cartier Manufacture had to demonstrate boundless ingenuity in order for matter and movement to give birth to this fascinating kinetic sequence. When performing a conjuring trick, the magician has to distract the attention of his audience and convince them, by the illusion he produces, of the existence of preternatural forces. In the Rotonde Double Mystery Tourbillon, the design team took inspiration from the “tricks” of Jean-Eugène Robert-Houdin, the father of modern magic, to create the illusion of levitation.
Connoisseurs of watchmaking are aware that the mechanism of the tourbillon, in a vertical position, uses the rotation of the cage in a given time to shield the balance (the regulating organ) from the influence of the gravitational attraction of the Earth by smoothing out
regularity errors (done by causing them to occupy every point on a circle in a given time). This fascinating device, set in the heart of the Rotonde Double Mystery Tourbillon, seems to defy the universal laws of gravity, giving the impression that it is floating unsupported in the void, and that its cage, rotating one turn in a minute and performing a complete rotation in its space in 5 minutes, has completely liberated itself from gravity.

Hiding what should not be seen
The watchmakers of the Cartier Manufacture have employed a disc of sapphire crystal with an anti-reflective finish containing an aperture the size of the tourbillon to give the best possible illusion of a cage in a state of levitation. To do this, they set the disc to support the cage in rotation. By doing this and positioning the minute wheel, which propels the oscillator, on the axis designed to limit the “resistance torque” inherent in the mechanism supporting the tourbillon, they succeeded in transmitting its force to the tourbillon, and thus causing the entire device to revolve in space once every 5 minutes. This results in the tourbillon making one full turn of the open, transparent space in 5 minutes, while the cage performs 5 complete revolutions in the same time... The ingenious way of achieving such a result is to place a rack around the edge of this sapphire crystal disc, transforming it into a large gear wheel that performs one revolution every 5 minutes.

Defying the laws of gravity
The 9454 MC Double Mystery Tourbillon movement is the result of long research. For example, numerous calculations were needed to determine the speed of rotation of the different moving parts. To optimise power consumption, the cage of the tourbillon performs one complete rotation in the space dedicated to it over 5 minutes – making it perform one turn per minute would have consumed 25 times as much energy. To improve the mechanical efficiency of this moving organ, the weight of its components had to be reduced to the minimum in order to limit the inertia of the rotating assembly comprising the disc and the titanium tourbillon cage. To compensate for the weight of the regulating organ and the “flying” cage, although the weight of the latter had been reduced to the absolute minimum (0.28 g), a circle segment designed to relieve the toothing has been positioned opposite the tourbillon to restore the equilibrium between the masses, with the effect of creating dynamic balance. 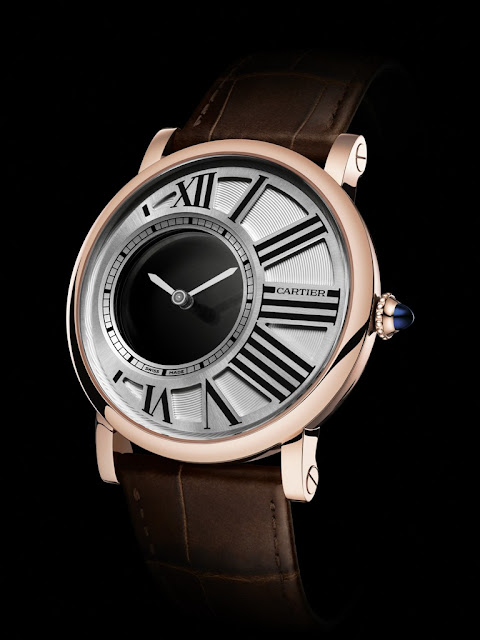 Montre Rotonde de Cartier Mystery
Breathtaking and ethereal, the Rotonde de Cartier Mystery watch hypnotises those who gaze on it with its hands that float in space. The purity of its design is such that the extraordinary watchmaking complexity of its mysterious display is forgotten. Indeed, perfecting this new Cartier Manufacture movement forced our watchmakers to rethink the traditional mechanism in its entirety. Their aim: to overcome the specific problems involved in driving large sapphire crystal discs. The paradox presented by an instrument of this kind is that the simplicity of the display conceals a watchmaking complication that demanded hundreds of hours of design calculation.
To bring a mystery wristwatch into being, the watchmakers of the Cartier Manufacture had to overcome all the constraints inherent in perfecting a display by hands whose connection to the movement is completely invisible. Thus, in order to limit friction between the sapphire crystal discs, it was decided that they should turn on fine pivots, like a wheel in a gear train, rather than in guide grooves, the traditional technique adopted for mysterious clocks.
This new concept, which is combined with the wheel of the hour hand, avoids friction and limits the power consumption of the movement. With friction reduced to a minimum, the next task was to reduce the inertia of these large discs of sapphire crystal, weighing just 0.56 g and fashioned using DRIE technology (Deep Reactive Ion Etching). Thanks to this cutting-edge method, the metal parts can be made by three-dimensionally building up material, thus obtaining a gear wheel of extremely high concentric precision in one piece with the sapphire crystal disc. The geometry of the assembly is exact to the nearest micron.
Perfection of design
To facilitate the final assembly of the different components under optimum conditions, Cartier opted for a modular structure. Thus the movement is made up of two separate elements: the movement proper, which occupies a crescent-shaped zone on the baseplate, and an independent display module occupying the circular space left vacant for the purpose. This sub-assembly, comprising four anti-reflective sapphire crystal discs with an antireflective finish, is assembled separately in a laminar-flow hood to prevent all possible presence of dust. When the timepiece is finally assembled, the hands begin to revolve in the void, as if by magic. By allocating 58% of the diameter of the movement to the sapphire crystal discs, Cartier has pushed back the limits of the mystery display and achieved record legibility.
Keeping the mystery alive
Timepieces with a mystery display have always been considered more fragile than other traditional complications, due to the presence of the sapphire crystal discs. The innovative design of the calibre 9981 MC enabled it to pass all the certification tests, including the requirement that it should resist over 500 consecutive impacts, as well as being dropped on to a hard floor from a height of one metre. This movement with its spellbinding transparency, slimness and accuracy, with a balance oscillating at 4 Hz (28,000 beats per hour), has a power reserve of 48 hours. The Rotonde de Cartier Mystery watch, with its fascinating balancing act, appears transparent to the last detail. But in truth, if this watch reveals the essential components of its manual-winding, individually numbered mechanical movement through the case-back, it only shows what Cartier is willing to let you see. In the past, Louis Cartier refused to give any explanation of how his mysterious clocks worked to those who sold them, so as not to divulge the secret. Today, the mechanism that connects the movement to the hands of the Rotonde de Cartier Mystery is so designed as to disappear into the structure of the calibre and remain invisible, keeping the magic alive... 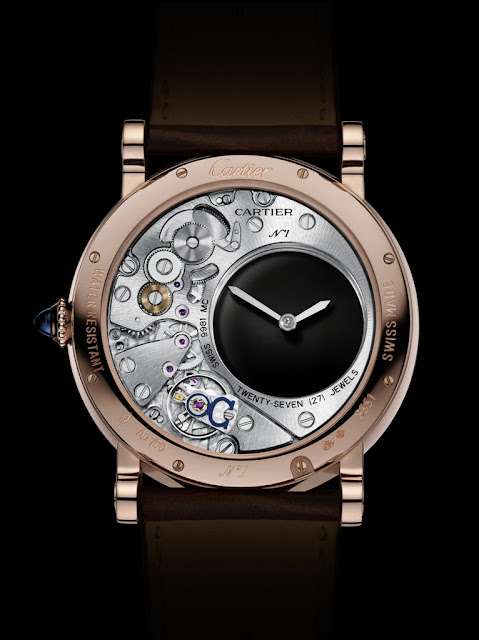 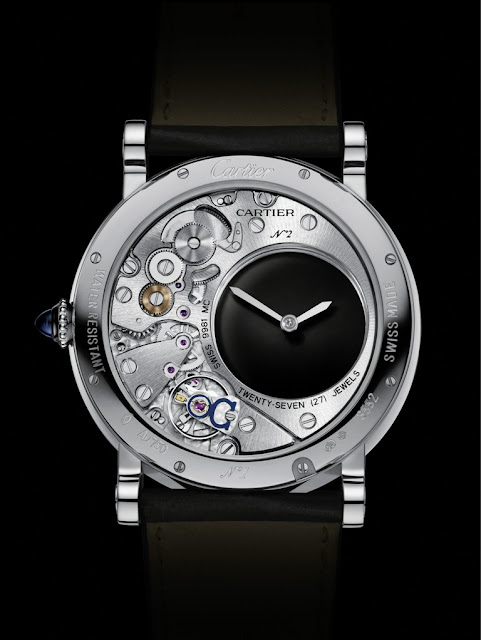 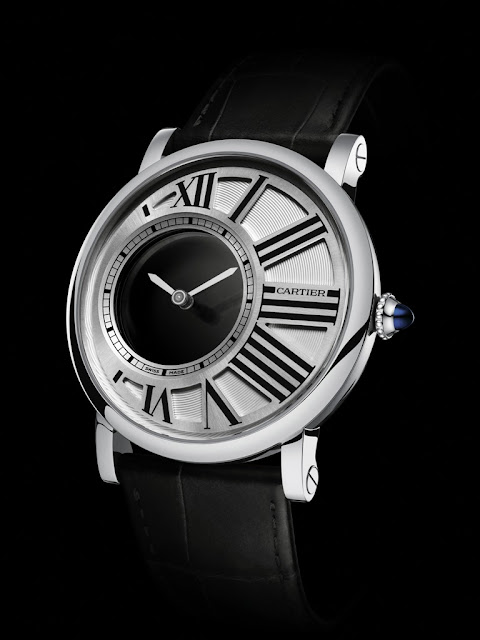